An irrefutable dimension to a memorable trip, no matter how short or long, is the kai we eat along the way. With our travels hermetically confined to our own shores for the past 12 months, it’s never ceased to amaze me just how many signature treats and iconic tastes burst forth with temptation from every pocket of New Zealand. Some star specimens have cultivated such runaway fame, their folklore-like status lords over their location like a landmark on a plate. Fergburger in Queenstown is such a case. But for all the whipped-up hype and passing fads that can leave you feeling impelled to buy into it through FOMO, here’s my list of New Zealand’s greatest holiday tastes and signature treats that deserve to be threaded into a road trip. By no means is this an exhaustive list – the entries I’ve included are merely a collection of my favourite holiday tastes, and where their retail presence has become an iconic regional attraction in its own right. 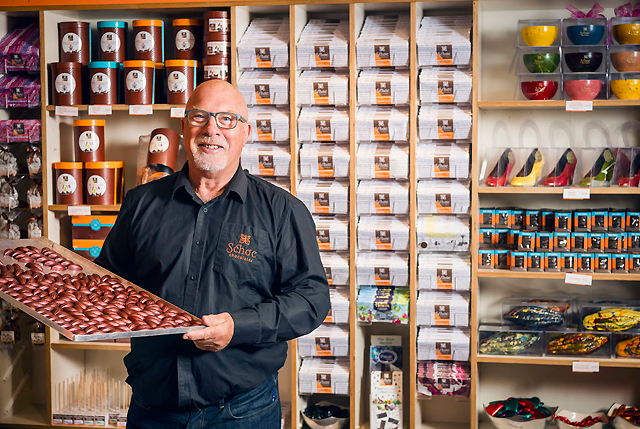 Chocolate. Yes, this will be highly contentious, but despite visiting and grazing from a plethora of artisan chocolatiers across the country, Schoc Chocolate in Greytown gets my gold-star. The artisan chocolate studio and kitchen is housed in a super cute colonial cottage on the main street of Greytown. Established by Murray Langham 18 years ago, Schoc is fawned over for its extensive range of handmade gourmet chocolates and unusual flavour combinations. There are over 60 different flavour combinations in the tablet range alone. The top three perennial selling flavours are lime & chilli, sea salt and lemon & white.

First runner-up? Makana Confections in Kerikeri. Home to their flagship boutique chocolate factory, Makana also operate a sister branch in Blenheim.  Drool over the production process and surrender to the free tastings. Makana specialises in fresh, gift-quality hand-made chocolates. Not dissimilar to the winery/cellar door experience, you can watch the production process, taste some samples and shop till your heart’s content. Butterscotch panache and creamy caramel supremes hit the spot for me, while their macadamia butter toffee crunch is also a best-seller. Their enticing Chocolate Café is an ideal pit-stop for a snack or lunch, with gourmet temptations galore. 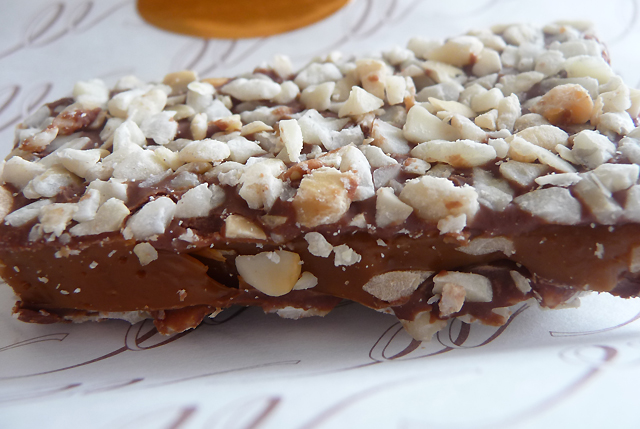 Speaking of sweet toothed pursuits, a genuine national treasure is Ohakune’s Eclairs. Johnny Nation’s Chocolate Éclair Shop is on the main street, tailormade as a calorific apres-ski treat for snow bunnies, after a day on the slopes of Turoa. The bakery has been a going concern for the Nation family for three generations since 1939, as has their éclair recipe. But don’t be mistaken, these are not the cigar-shaped French patisseries you may know. Ohakune’s éclairs are the size of a farmhouse pancake, baked into a pile of choux pastry, liberally slathered with chocolate and snow-white whipped cream. Over the summer months, the bakehouse goes into hibernation, with the eclairs returning for sale around May. 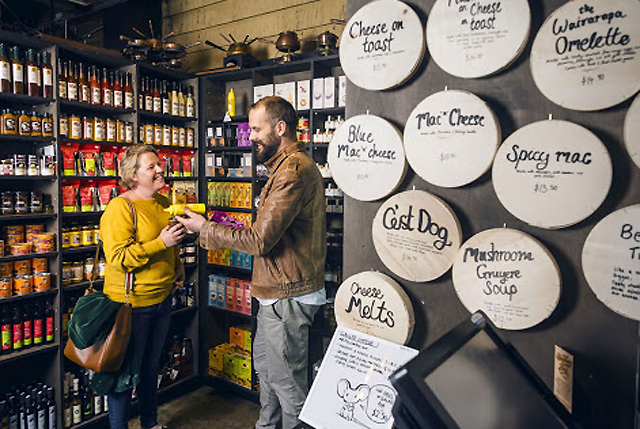 Fromage fans are spoilt for choice with artisan cheesemakers studding the country. If I had to pick one essential experience, my pick would be Featherston, home to the fiendishly popular C’est Cheese, under the command of Paul Broughton. A recent innovation is the Cheese Bar where you can tuck into some cheesy delights, whether you want to sample a cheese flight or something more substantial like their Mushroom on Cheese Toast, which blows up like a balloon. As purveyors of a huge range of New Zealand gourmet cheeses, 10% of the cheeses are made on-site under the label of Remutaka Pass creamery. It’s also a great coffee stop where Paul’s own brand, Remutaka Pass Coffee, is locally roasted.

Speaking of cheese, the mysterious Southern Cheese Roll… a local tradition and delicacy that is a must try when visiting Southland. Like the age-old tiffs over Pavlova and Marmite, the origins of the cheese roll have been lost to the mists of time . Truth be told, no one really knows how the cheese roll came about, but Southlanders are resolute that their rolls are unbeatable, served hot with lashings of butter. It’s not called “southern sushi” for nothing; the humble cheese roll is a delicacy that requires finesse, an often-secret recipe and hands well-trained in the art of the roll. In May, Bluff plays host to Southland’s Annual Cheese Roll event. Where’s my go-to for supreme cheese rolls? Invercargill’s Batch Café in Spey St. 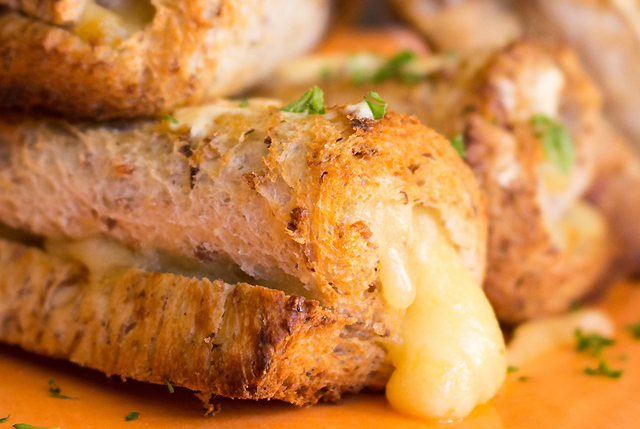 Also down south if you fancy sampling muttonbird, or tītī, your best bet for this scarce delicacy is Oyster Cove at Bluff’s Stirling Point.’ It’s quite a tough and oily meat. Harvesting them is strictly limited to Rakiura Maori and the season runs from April to May, with generally 250,000 taken a year.

Could there be a better tasting oyster anywhere in the world to be the Bluff Oyster? These delicate and succulent shellfish are dredged along the coastlines of Southland between March and August every year. Originating in the pristine, cool waters of the Foveaux Strait, one of the few natural oyster beds in the world, Bluff oysters are known for their unique flavour that is loved around the globe. Harvested for over a century, if you want the freshest tasting Bluffies, you can’t go wrong by ordering up a dozen battered oysters with chips, from Fowler’s Oysters shop, on Ocean Beach Road in Bluff. The taste of heaven! 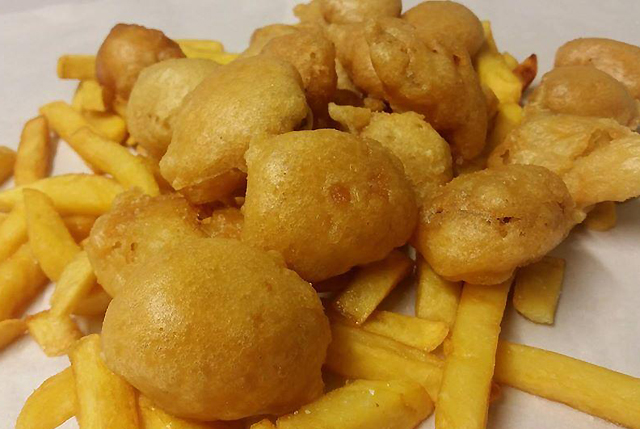 Fish ‘n Chips. Oh boy – what shop passes muster as destination dining? My vote goes to Bobby’s. No visit to Tauranga is complete without a fresh feed from Bobby’s Fresh Fish Market. This city institution hums with customers from early morning to sundown. I’ve never seen so many people patiently lined up for their fill of freshly cooked snapper, in beef fat not oil, at 10am. The shop edges the fishing wharf where the fresh produce is brought ashore. How’s that for a zero kilometre meal? Nothing beats ordering your meal and devouring it, right alongside the fishing boat that delivered most of the day’s catch, while catching a sea breeze. Charting up over four decades of fans, do not miss this local legend. 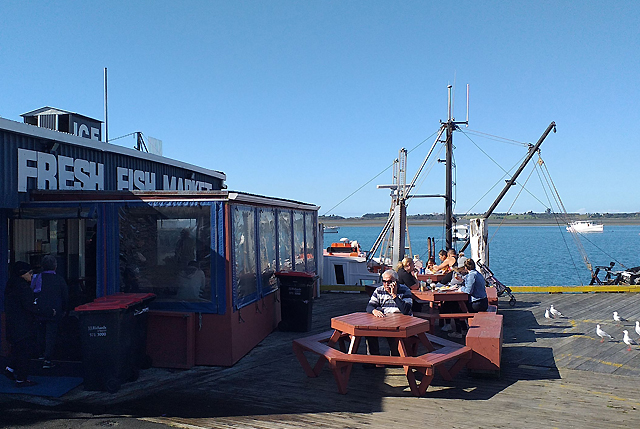 Equally likely to arouse fierce debate and disagreement, what is New Zealand’s greatest destination for pies? We are blessed with a plethora of pastry and pie-making legends, from Maketu Pies to the Fairlie Bakehouse, but Jimmy’s Pies in Roxburgh get my nod.  Made to an old family recipe, Jimmy’s have been making their meat pies for 50 years, with 20 different types of pies on offer. The power of Jimmy’s Pies endures – they make over 25,000 pies every day from their Scotland Street shop in Roxburgh That’s 48 times the town’s population! 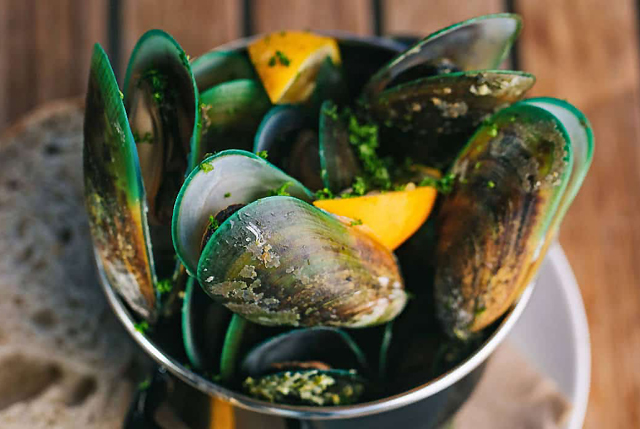 Pelorus Sound is where 70% of our green-lipped mussels are grown, of which 70% are exported worldwide. When in Havelock, get your fill of these tasty morsels at Mills Bay Mussels Tasting Room & Eatery, located in the Havelock Marina. Situated right at the front of their Mussel Packhouse, you can gorge yourself stupid on the freshest mussels imaginable, served in a variety of ways, whether you want to down half a dozen au natural raw shucked mussels, drizzled in a lovely Asian mint dipping sauce, or presented as Garlic Butter Mussels, grilled on the half shell with a crispy crumb. Heavenly! 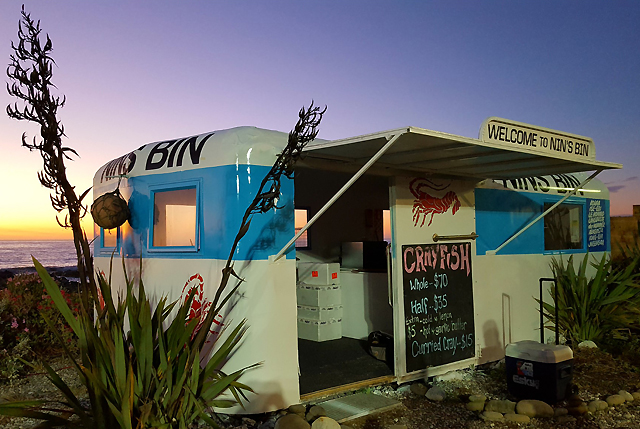 Kaikōura Crayfish. When tripping along the spectacularly scenic Kaikoura coastline on SH1, pull over to the roadside kiosk of Nins Bin for a fresh catch of cray. The catch quota is closely regulated by the season, so once they are gone, they’re gone.

Pleasant Point is a charismatic village in the heart of South Canterbury, proud to be the birthplace of the Denheath Custard Square, first made in the town’s former post office. These decadent deserts are now produced in a purpose-built kitchen in nearby Timaru and exported worldwide. Sampling one of these fluffy, high rise, melt-in-your-mouth, rich and creamy, custard-filled squares, is one of life’s sublime pleasures. They’ve diversified their range, but you can’t go wrong with one of the gourmet originals, meticulously and individually wrapped. You’ll find them on sale in any half-decent supermarket or tearoom, across Canterbury.) 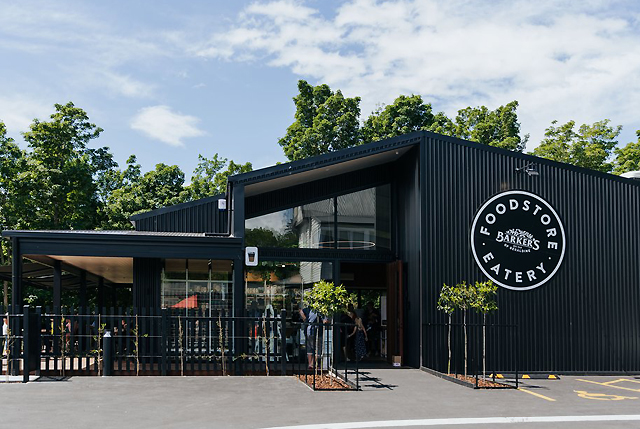 Nearby in Geraldine, the town is synonymous with Barker’s. Barker’s of Geraldine is a signature attraction, so be sure to swoon over their amazing new foodstore and eatery in the heart of town. There’s lots of complimentary ‘tasting’ stations and many of their products are integrated into the Eatery Menu, which will fuel your inspiration on how you can use their products at use at home. With a mind-boggling product range of 600 items, their mainstay is juices, syrups, sauces, preserves, chutneys, smoothies and jams. And the staff are only too happy to enhance the tasting experience with their expertise. You won’t find such a comprehensive range of Barker’s products in the local supermarket. If you run out of room in the car for your fresh stocks, gift-packs can be couriered, and you can order online. 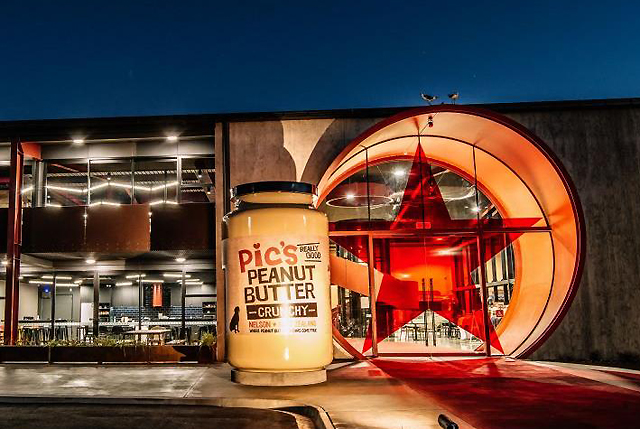 It’s my favourite breakfast spread and a trip to Nelson must include a visit to Pic’s Peanut Butter World. Kids go gaga over their factory tour which includes the chance to make your own peanut butter. Pic’s also does a very fine job with almond butter and cashew butter, but nothing excites my nostrils quite like inhaling the whiff of freshly roasted peanuts. And there’s a lot of buzz about Pic’s colab with Whittaker’s, joining forces to produce Pic’s Peanut and Chocolate Butter. It’s billed as tasting like a peanut slab on your breakfast toast. 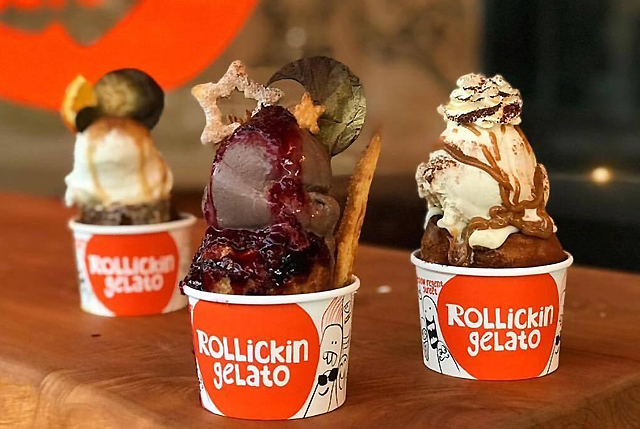 Finally, a tip of the hat to my hometown. Icecream aficionados flock to Rollickin Gelato. These local legands have two outlets, New Regent Street and Cashel Street, where they whip up gelato from organic milk and real fruit sorbet in their two stores. Try a scoop of Superman Choc, Raspberry Beret, Nice Melons, Salty Caramel or Hokey Tokey Pokey for a cooldown to relish. 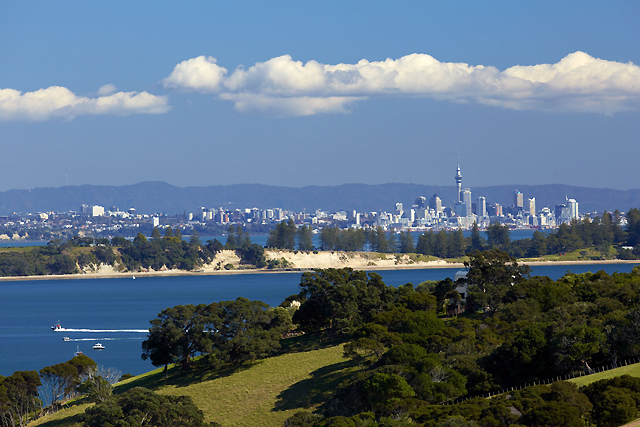 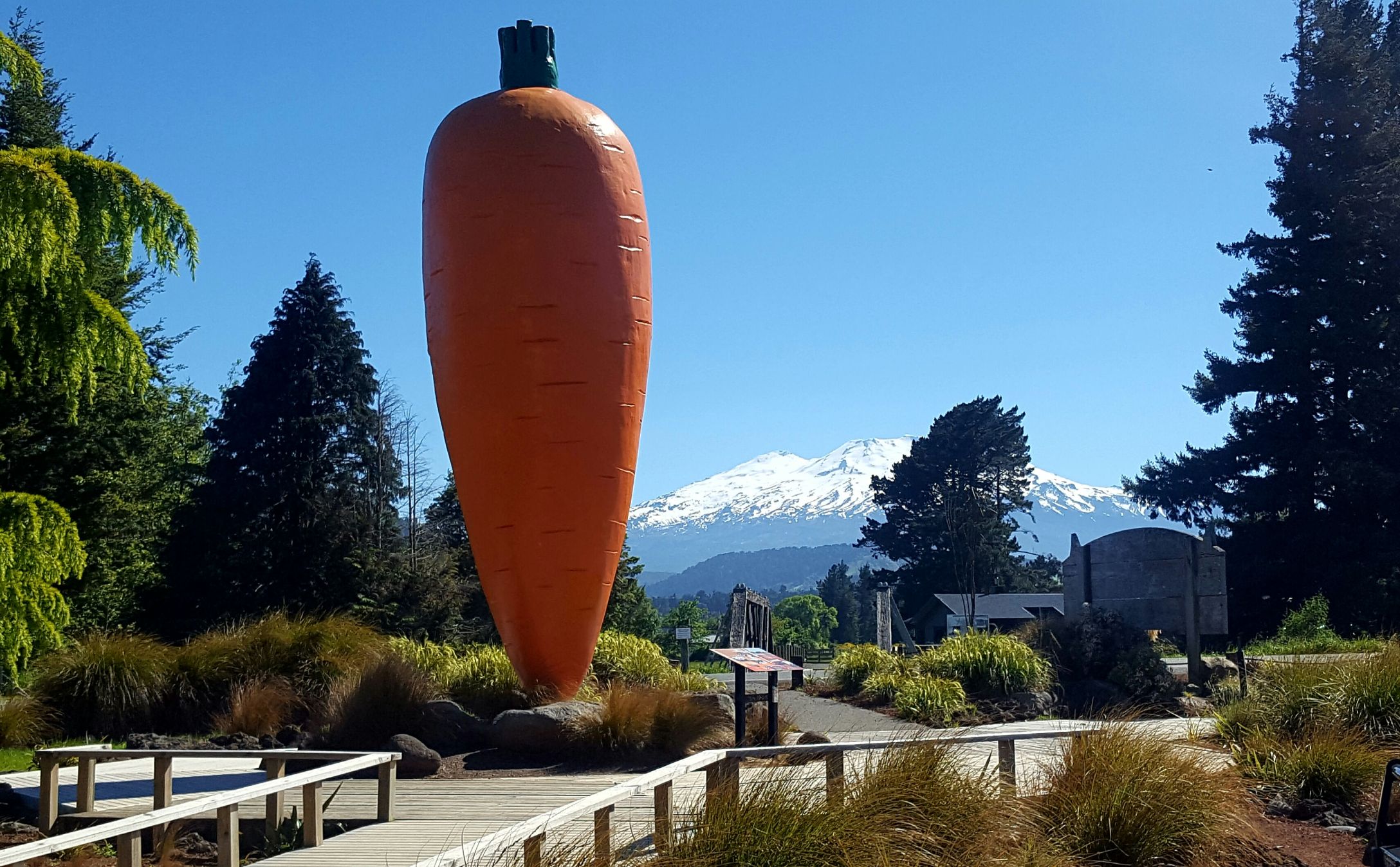 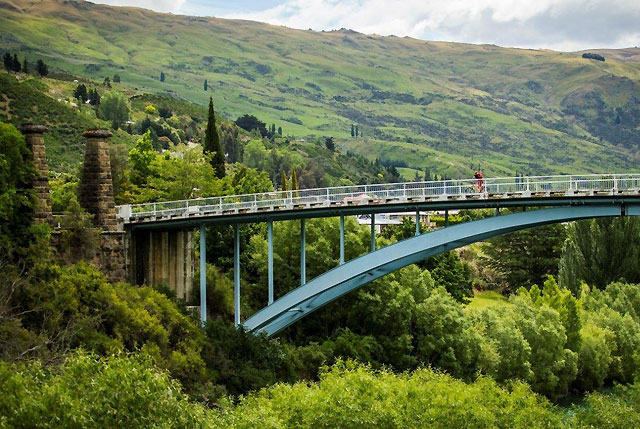 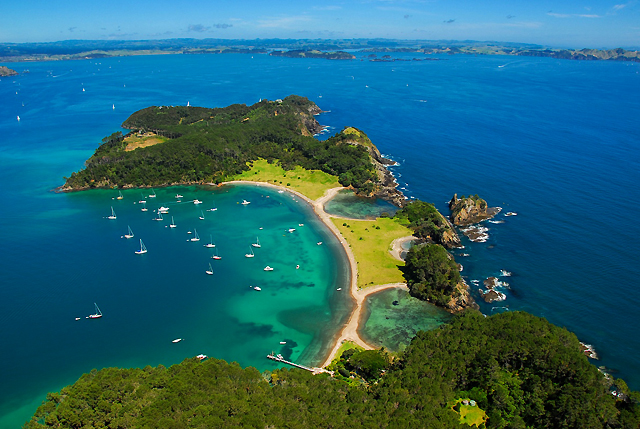