Dunedin. A pretty good Plan D? You bet it is. In the depths of winter or fresh spring months, plunge into the hot-tub of southern hospitality in irrepressible Dunedin. You’d struggle to find a comparably sized city that serves up such a spoil of fabulously distinctive visitor experiences. Fanning out from the city, the long, plumped and ranging finger of Otago Peninsula, fringed with beaches, scalloped by bays, carpeted in lush pastures, furnished in dry stone walls and studded in volcanic peaks is a world unto itself. 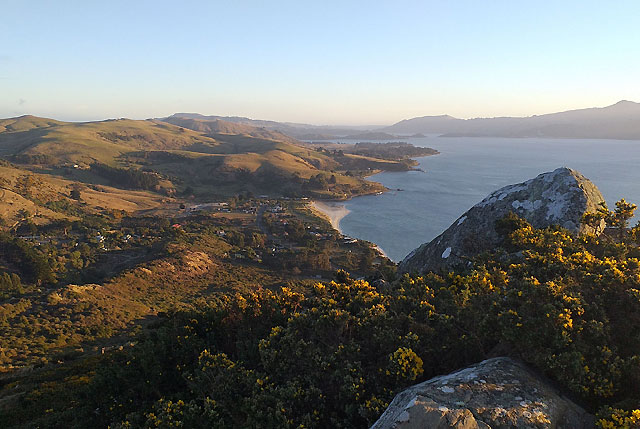 Bountiful, bucolic, an urban escape-hatch. Richly blessed with flippered and feathered possibilities, the wildlife alone is a perennial banner attraction, but the peninsula also abounds with invigorating walking trails. Before I binged on the birds, I took a head-clearing jaunt to Victory Beach.Just past the treasured Portobello Hotel, which my great great uncle was once the publican of, I followed the signposts to Okia Reserve and Victory Beach, the peninsula’s longest beach – so beautiful, you could pretend it’s tropical and situated in Hawaii. 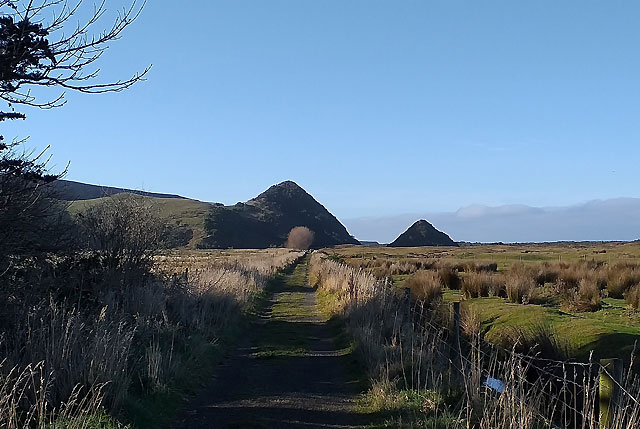 Before reaching this 3km-long beach, the 20 minute walk from the carpark leads you to the striking Pyramids, two prism-shaped volcanic rock formations. These bewitching natural landmarks were formed over 10 million years ago. Eat your heart out, Egypt! The reaching views from the top of Little Pyramid are sublime, while the beach which takes its name from the partially visible 1861 shipwreck of the SS Victory, is home to hoiho, fur seals, leopard seals and sea lions. Keep your distance! 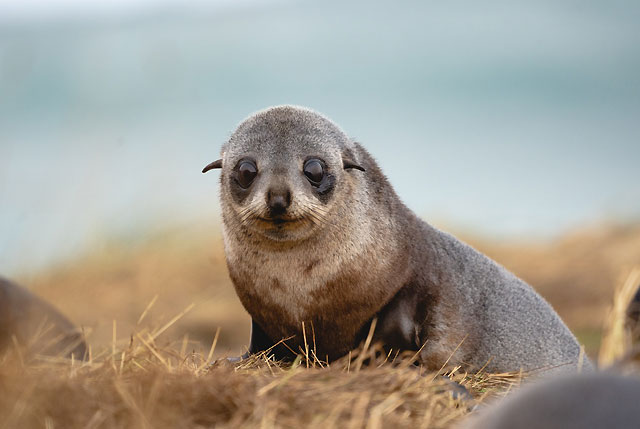 Then it was on to the peninsula’s prized draw, the Royal Albatross Colony at Taiaroa Head. Warmly greeted by the centre’s effervescent marketing boss, Sophie Barker (of Larnach Castle stock) we made our way up to the Royal Observatory Box where several dozen chicks, bulging fluffy balls of snow-white feathers, speckled the headland, waiting for their parents to return from sea with a squid smoothie. 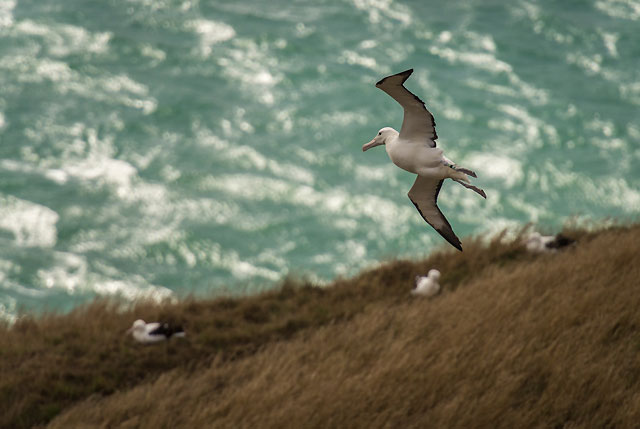 It was enthralling to savour these majestic seabirds up-close, in the world’s sole mainland albatross colony. The passionate guides captivated me with commanding insights on the northern royals, who will leave the colony on a two week day journey to the Chilean coastline, eventually returning home to breed on that wind-swept cliff they clumsily departed from, after several years of far-flung foraging at sea. 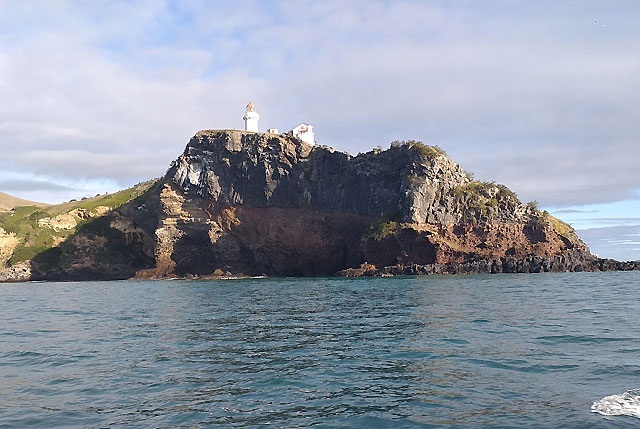 The sound of peeling bells still rings out triumphantly from Dunedin churches and schools when the first juvenile returns for the next breeding season. The birds can reach a speed of 120km, courtesy of their awe-inspiring 3 metre wingspan. Check out the colony’s Royal Cam, which is a global hit. The headland’s history is thickly layered with intrigue, first studded with the formidably fortified Pukekura pa by local Maori – one of the New Zealand’s biggest coastal fortifications. 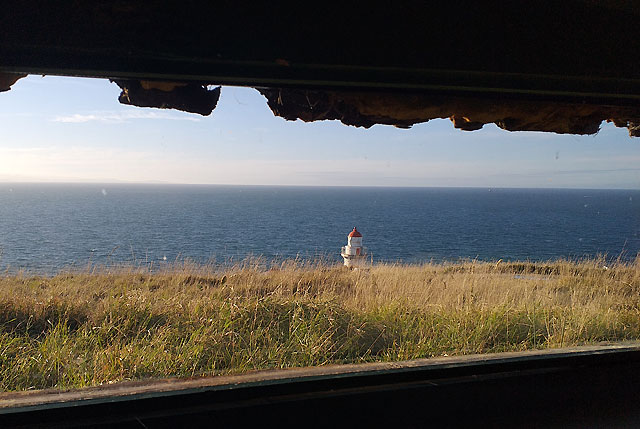 Following Dunedin’s new-found riches stemming from the gold rush, European settlers established Fort Taiaroa as fears intensified that the Russians would invade Dunedin to pilfer its gold. By 1889 the Armstrong Disappearing Gun was ready to defend the city, an ingenious weapon that was raised to fire before swiftly recoiling into its circular underground bunker. 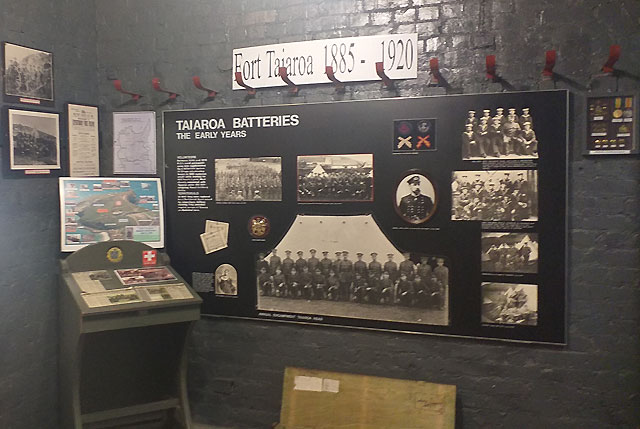 Sophie led me through the evocative tunnels to ogle the antique gun that is still in place, while the wall markings graphically caution the operator to steer clear of the glorious 1864 Taiaroa Lighthouse. To think chicks are nesting directly above the gun today, is a startling head-on collision of natural and cultural history. www.albatross.org.nz 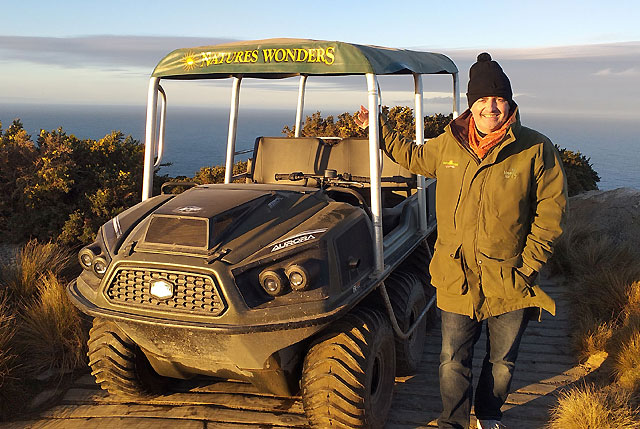 After revelling in the riches of the albatross colony, I headed up the southern side of Taiaroa Head to the Reid family farm and their eco-tourism business, Nature’s Wonders. Warmly welcomed by Perry, Martin and Tracey Reid, this 172 hectare headland sheep farm, currently with 1500 perendales, has been in the Reid family since 1849. 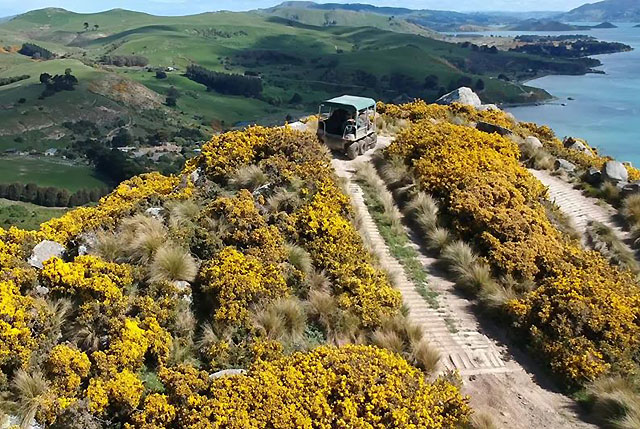 Sheep numbers have been steadily reducing with thousands of native trees planted and many acres of gorse cleared, to restore the environment and enhance the natural habitat for penguins, seals and cormorants. This truly inspirational self-funded conservation project is driven by an abiding desire to safeguard the natural world for future generations. Chances are, because it isn’t a publicly-funded DOC project, you haven’t heard of it. 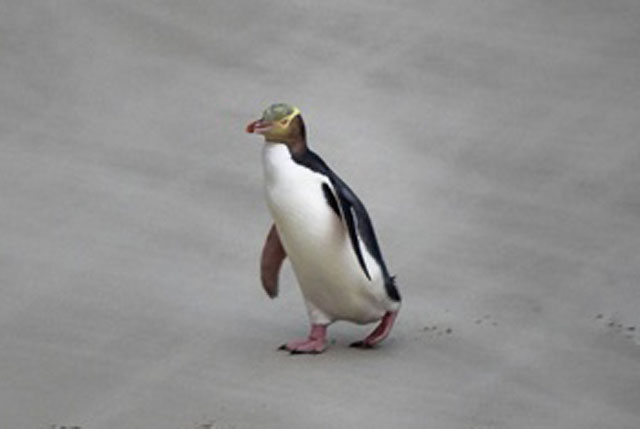 The Reids have protected the beaches with predator proof fencing, alongside a comprehensive predator control programme, with regular patrols and trapping across the property. Martin took me on an 8WD Argo Tour across the undulating property, soaking up the long-range peninsula, harbour and ocean panoramas. But the piece de resistance is the eye-popping wildlife wonders of Penguin Beach, where no human footprints have marked the sand for years. 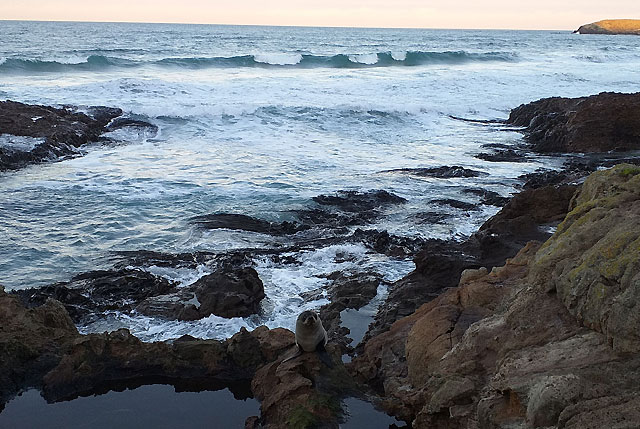 The wildlife has free reign, blissfully oblivious to gawping humans from afar. Predator-proofed, the conservation prowess of the Reids allows you to savour intimate views of the farm’s fabulous fur seal colony, the little blue penguins in their nesting boxes and the majestic spectacle of hoiho. 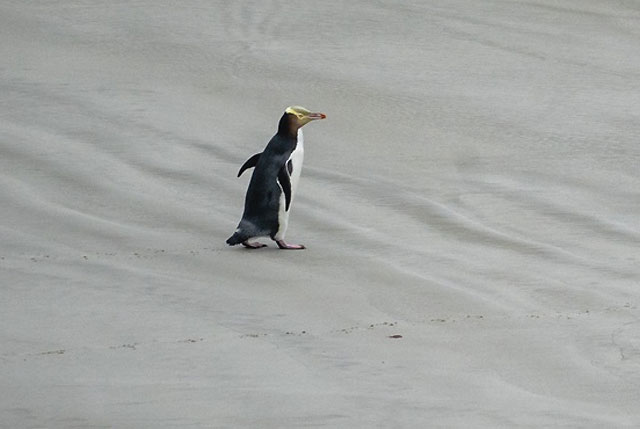 As twilight took hold, I had to pinch myself as we gazed across Penguin Beach while numerous yellow-eyed penguins (hoiho) waddled ashore in all their flippered finery. There was so many coming ashore from the ocean, I actually lost count in my starry-eyed state. A penguin abruptly shuffled into view, peering out from the hillside foliage, as if to say to their partner galumphing across the sand, “Hurry up. You’re late for tea.” It was a priceless spectacle that totally transfixed. Nature unplugged, in vivid 4D. 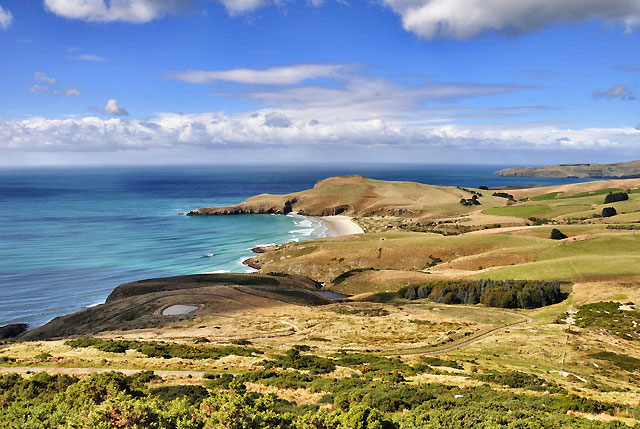 At last count, Martin tells me that there are 23 breeding pairs of hoiho on Penguin Beach, which could well make it the world’s biggest colony of yellow-eyed penguins. It’s a radiant tribute to the vision, grit and tireless dedication of the Reid family to wildlife conservation. This knock-out tour should top your list. www.natureswonders.co.nz 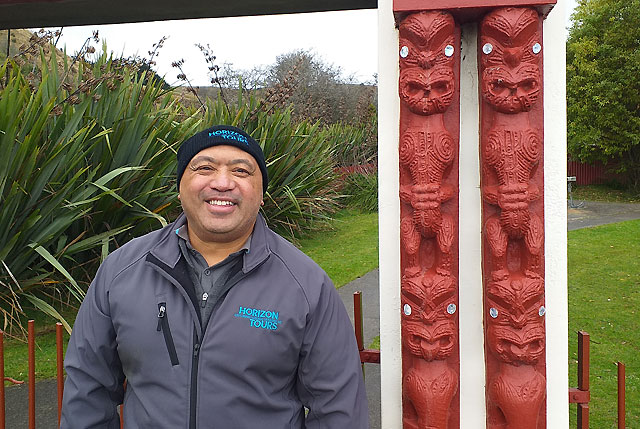 Another supreme way of appreciating the rich tapestry of the Otago Peninsula is to take a Culture in Context Tour with Horizon Tours. James Karawana treated me to a rolling medley of highlights and illuminating insights as we traversed the peninsula, staking out the most scenic vistas, learning about the wetlands around Hooper’s Inlet, the heritage of the harbour and the deep Maori history. You’ll notice the monumental mission to complete the road widening and shared path project along the full length of the peninsula, continues at pace. 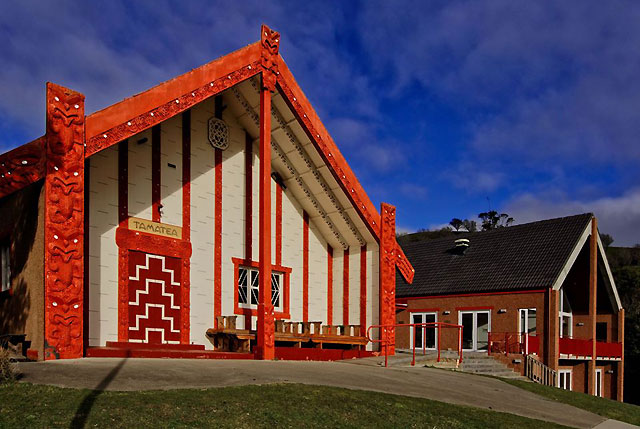 British sailing ships travelled through the entrance of Otago harbour, where the Treaty of Waitangi was signed by local chiefs from Pukekura Marae. As peninsula land was subsequently purchased, the marae was relocated in 1857 to the harbourside settlement of Otakou, which remains a significant Ngai Tahu marae, regularly hosting the tribe’s official Waitangi Day commemorations. It’s a magnificent site. Otakou also boasts some of the cutest cribs you’ll ever see. Over the course of four hours and a fabulous lunch platter, you’ll come away with a far greater appreciation of our shared cultural heritage and how Maori and European arrivals to Otago, survived, adapted and thrived. www.horizontours.co.nz 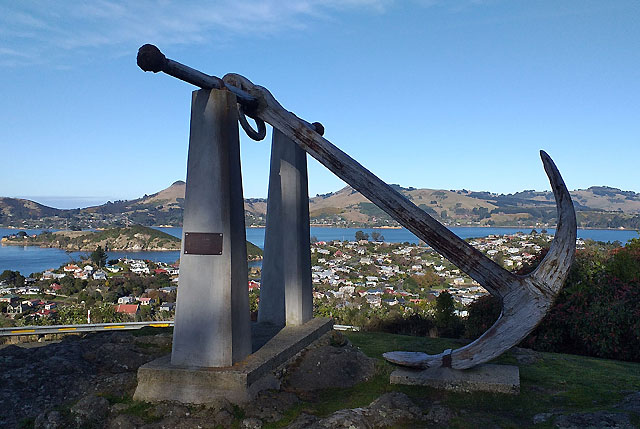 Just 20 minutes from the heart of Dunedin, historic Port Chalmers crowns the northern side of Otago Harbour, backed by indented verdant ranges and mighty Mt. Cargill. From here, I took two more indelible dips with Dunedin’s feathered friends, first by boarding a Port to Port Wildlife Cruise. The charming and enterprising Rachel McGregor established this venture a couple of years ago, which whisks you out past the heads into the Pacific Ocean, where a vast menagerie of species had flocked to feed on the tide line. 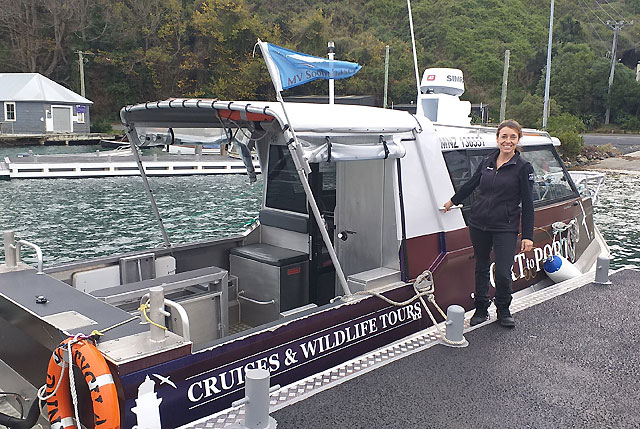 Over the course of 90 minutes, we gawped in awe at the wheeling aerodynamics, theatrical sea landings and take-offs of five different albatross species, alongside close encounters with shags, shearwaters, oystercatchers, red-billed gulls, before marvelling over the hollering sealions and snoozing fur seals. It’s a photogenic feast of coastal wildlife, backed by the beauty of Taiaroa Head, while Rachel’s perky, incisive narration greatly enhances the encounters. A class act. www.porttoport.co.nz 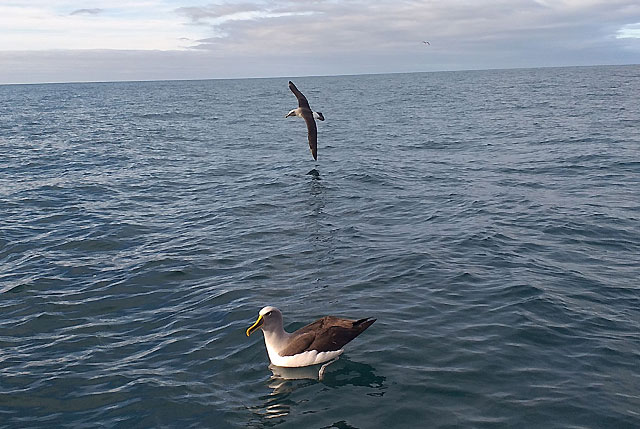 Head up the hill from Port Chalmers to the ‘cloud forest’ of Orokonui Ecosanctuary. As the welcome winter sun illuminated the sanctuary, the reaching views across Silverpeaks Scenic Reserve and Blueskin Bay are deliciously soothing for the soul. 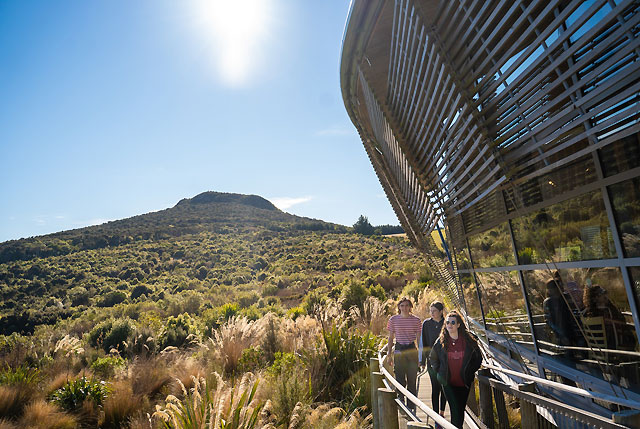 Orokonui is the largest predator free forest in the South Island and this super safe conservation refuge was teeming with endangered wildlife, including takahe and South Island brown kiwi. As I casually tootled through the forest-draped walking tracks, a roll call of native birdlife warbled, fluttered, preened and played up. 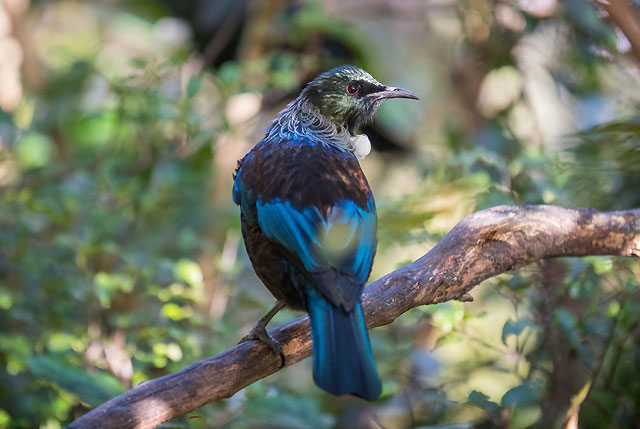 The puffed-up male tui and bellbirds were in full operatic cry, as were the cheeky kaka. The unmistakeable whoosh of a low-flying kereru was swiftly followed by the bizarre spectacle of brilliantly-named brown creeper birds stealthily creeping between the branches. 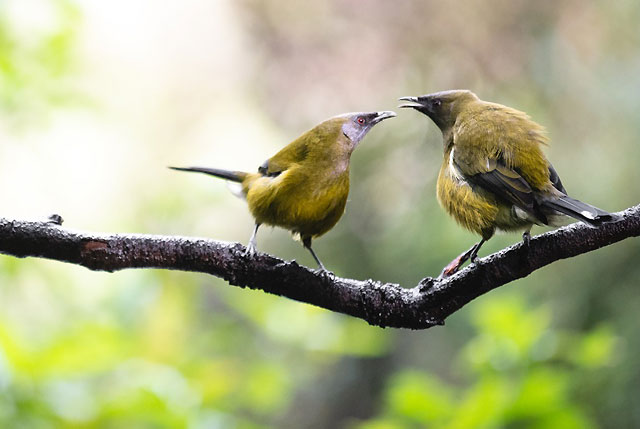 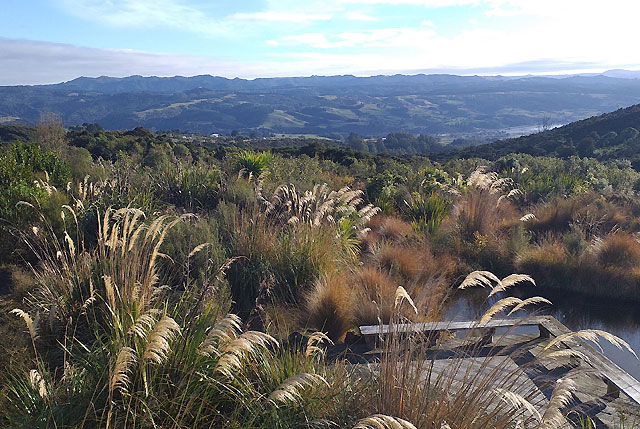 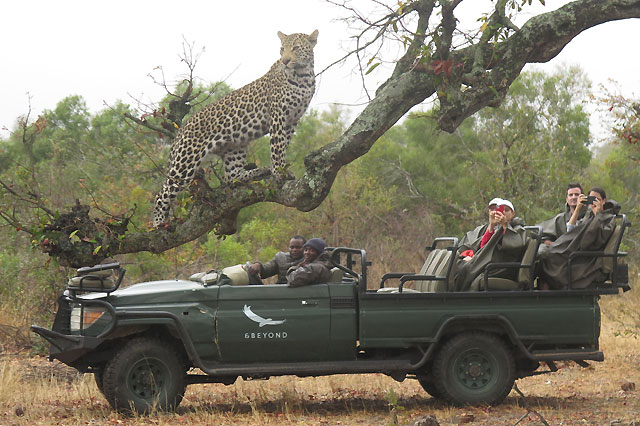 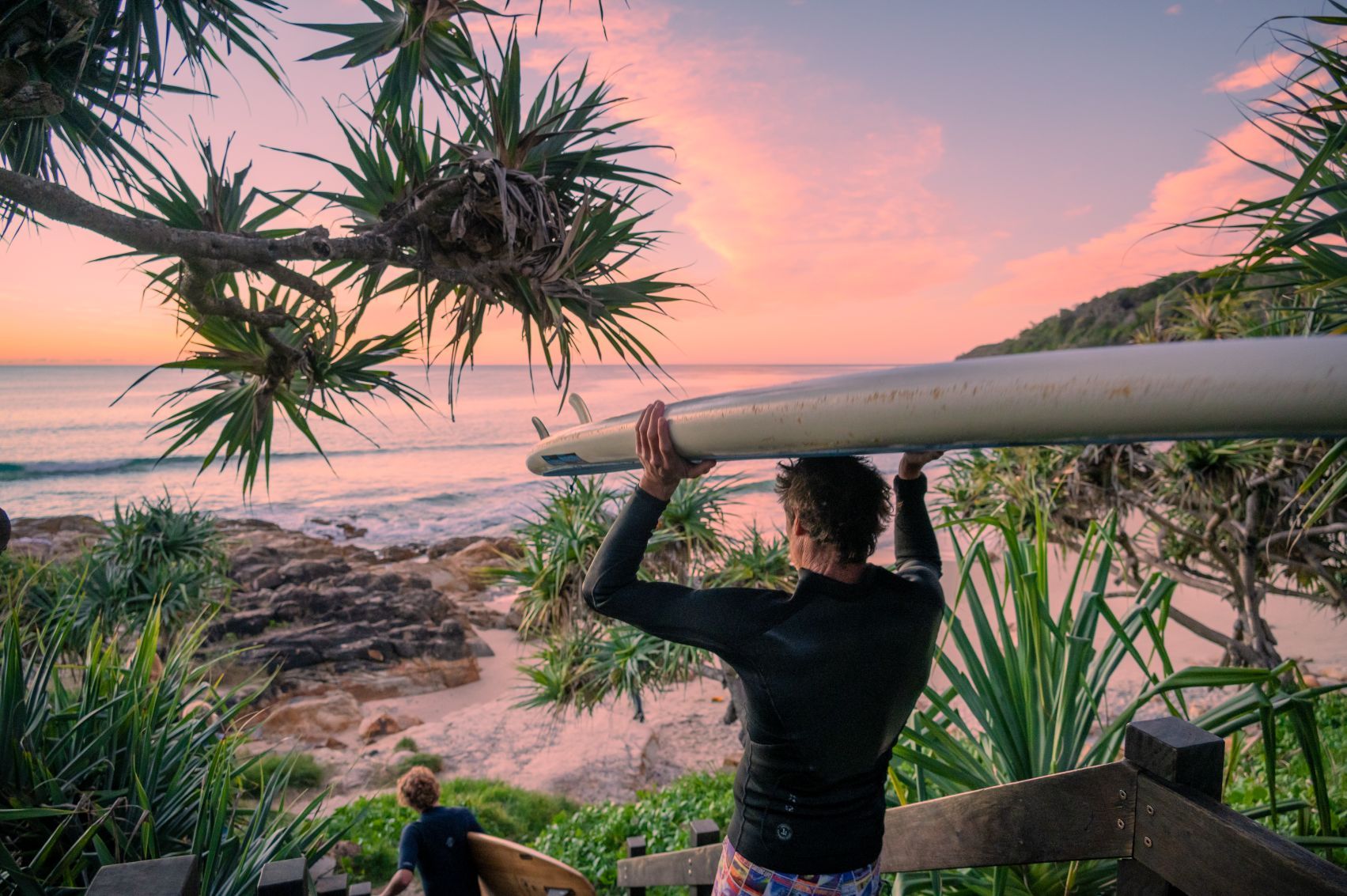