Roused by the rhythmic raw soundtrack of roiling ocean breakers and the gentle pitter-patter of a pre-dawn shower, I was up with the seals, to strike out along the coastal trail at Cape Foulwind. I’d just spent the night, wrapped in elemental splendour at Omau Settlers Lodge Motel, Cape Foulwind. Swathed in lush, manicured grounds that host some very cheeky resident weka, all studios at this tranquil coastal roost boast a private balcony with expansive ocean or mountain views. Accentuate the serenity by enjoying a soak in the outdoor hot tub, or relax by the fireplace in the shared lounge area. 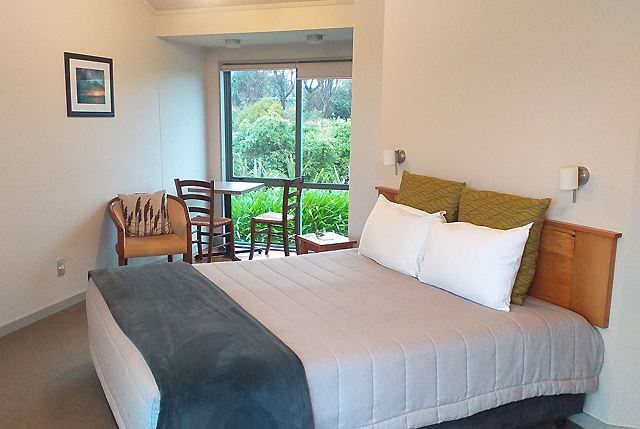 You’ll enjoy free WiFi and a complimentary continental breakfast with homemade breads, preserves and jams, cereal and fresh fruit. Accommodations are light and bright and stylishly appointed with en-suite bathrooms, quality New Zealand timber furnishings, flat-screen TV and ultra-comfortable beds. It’s just a short stroll to Cape Foulwind lighthouse, the exalted Omau Cliffs and the characterful Star Tavern (the pizzas are fiendishly good) is right across the road. Karen and Lee are ebullient hosts who’ll ensure your stay is a distinctive one. www.omausettlerslodge.com 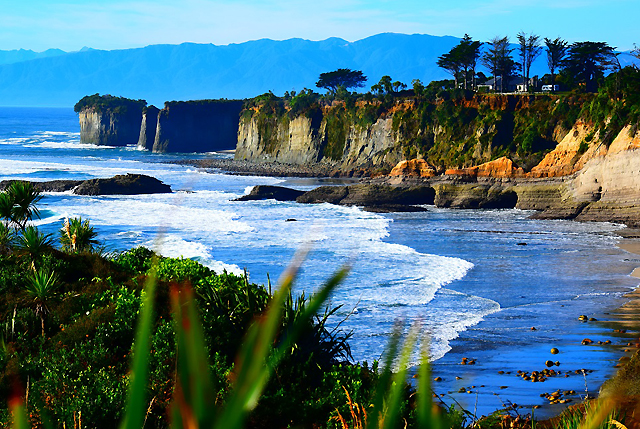 Cape Foulwind lighthouse stands sentinel on the headland, in much the same fashion as when it was first built in 1926. The foundations of its 1876 predecessor stand alongside it – built in rimu, which suffered from rot. History runs deep here, as it was where Abel Tasman first dropped anchorage in New Zealand in 1642 and the cape earned its name from the operatically howling weather that greeted James Cook on his voyage in 1770. It’s also the closest point to Australia. The sweeping panoramas are stupendous. I gazed north along the coastline to the strikingly sculpted cliff-backed beaches at the northern end of the cape. Omau Cliffs, where hard granite intersects with softer mudstone, glow a golden hue in the sunshine. They were previously nicknamed the Scarborough of New Zealand and remain a favourite shoreline haunt in the summer. 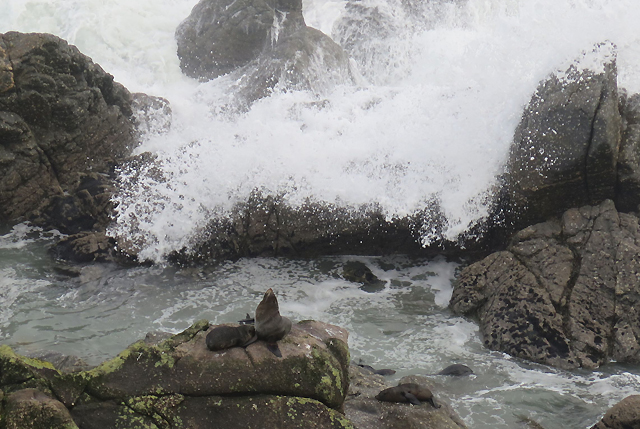 Beyond the lighthouse, a 90 minute coastal walk from Cape Foulwind south to Tauranga Bay passes along the edge of an escarpment, undulating grazing pasture, a sandy beach and granite bluffs, serving up monster views of the rugged coastline. I cheated and drove around to beautiful golden sweep of Tauranga Bay, a surfies haven, taking the shorter track from the car park to the seal colony. The 10 minute walk up to the headland leads to the lookout points of the seal colony, draped across the wave-battered rocks, below. Beyond the shoreline, a rocky outcrop called Wall Island is like a satellite town to seal city, and the thoughtfully mounted free-to-use binoculars, provide magical glimpses of the playful fur seals enjoying some island time. Tauranga Bay is one of New Zealand’s most accessible fur seal colonies and the place hits fever pitch over summer it’s teeming with frolicking pups. 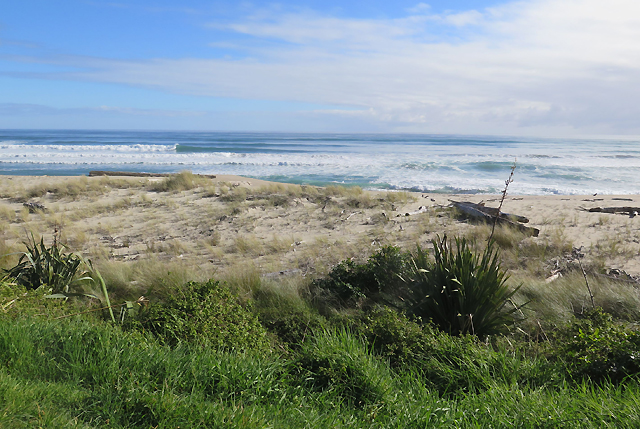 Pointing the car north, I popped by Carters Beach, a family favourite over summer, before passing through Westport to Waimangaroa, where the road is pressed against the rocky shoreline by thickly-forested hills. I fondly recall my first family holiday to the West Coast when I was seven. We stayed at Waimangaroa and visited the Denniston coal-mine, where a worker gifted me an old blue miner’s helmet. I still have it. Following the signposts, I drove up to the top of the 700 metre plateau, where only a few scratchings remain of what was once a bustling mountain village, a coalmining community living in the clouds. 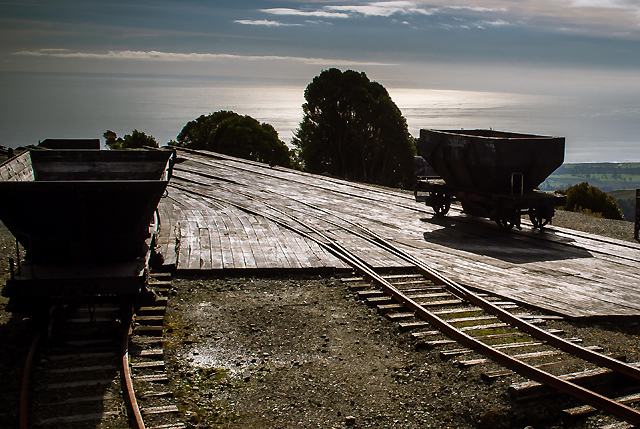 At its peak, Denniston was home to 1500 residents, just over a century ago. The starring attraction is the Denniston Incline, one of New Zealand’s greatest engineering feats, which opened in 1879. This fantastically steep rail track system, which tilts at 45 degrees, was built to carry coal from the Rochfort Plateau down to Conn’s Creek, 518 metres below. Empty coal wagons were hauled back up the slope by the weight of the descending loaded wagons. It was a counter-balancing triumph and the only way in and out of Denniston until the road was built in 1900. Not only did it transport coal, but people, furniture and all manner of goods.  An old family friend who grew up in the area recalls riding the wagons as a childhood weekend pastime! 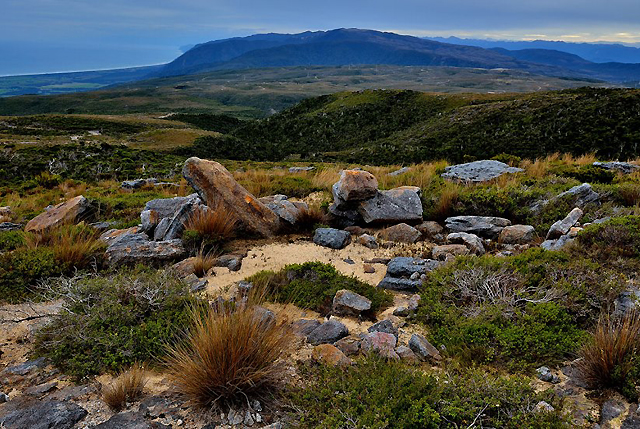 The Denniston Incline finally closed in 1967, but many vestiges of its guts and glory remain in situ, including the huge brake drum and some of the wagons at the top of the incline. In addition to taking in the ghost-town wistfulness of Denniston, the far-reaching views across the region and coast, from the lofty plateau are incomparable. More vestiges and echoes of the glory days are speckled all the way up the Buller Bay coastline, in sleepy settlements like Granity, Millerton, Ngakawau, Hector and Mokihinui. I headed further north, over the bush-clad heights of the dramatically scenic Karamea Bluff, thickly robed in rimu and matai forests. 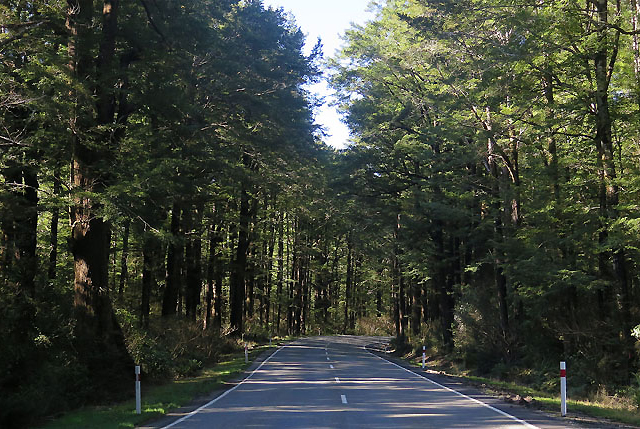 More expansive vistas of the pounding Tasman Sea unfurled before me, before I descended into the coastal lowlands of Little Wanganui. Purring across the flat terrain, a roadside billboard was emblazoned with the greeting: Karamea – Welcome to Paradise. Vivid and velvety green pastures, backdropped by jagged ranges, thickly carpeted in native forest, is my kind of paradise. Relaxed and unhurried Karamea amplifies the sense of idyllic solitude. A smattering of art and craft studios grace the main street of the West Coast’s northernmost settlement, no doubt inspired by Karamea’s soul-soothing natural landscapes. It’s so far north, Karamea’s subtropical maritime climate is warmer and drier than what most Coasters are served up. 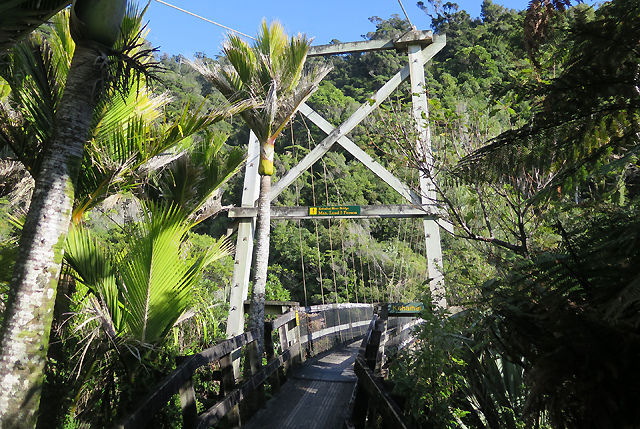 It shares the same latitude as Nelson and is even further north than Wellington. On the doorstep of the Kahurangi National Park, as the warm spring sun blazed down, I took the short drive to the Karamea end of the Heaphy Track. A sublime little taster of one of our Great Walks can be enjoyed by taking the Nikau Grove walk. Starting from the gnarly old swingbridge that traverses the Kohaihai River, the 40 minute walk ushers you into a lush heart-stealing forest of palms, headlined by thousands of Nikau palms. With rigid fronds forming a uniform fluted shape, they’ve long been my favourite New Zealand tree. 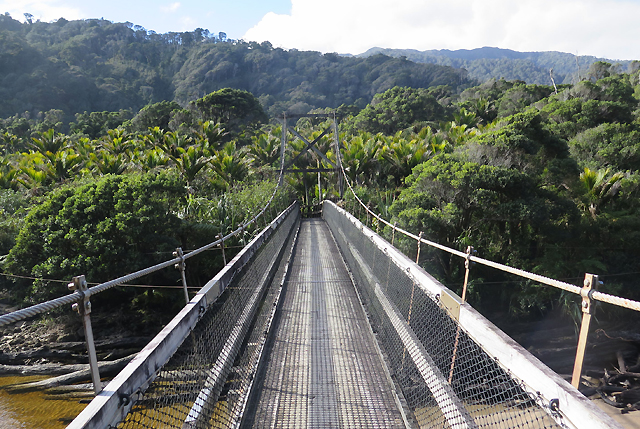 Another great short walk is the 90 minute return romp to sun-kissed Scott’s Beach. One final experience on my itinerary was a rendezvous with the Oparara Basin. Close to the Heaphy Track carpark, McCallum’s Mill Rd is the route you’ll need to take. This old logging road, narrow, steep, unsealed and winding, is not for the faint-hearted. But the 15km ordeal is undeniably worth it. The access road is about to be get a very welcome upgrade. The surrounding karst landscape is mantled in primeval rainforest and is home to a beguiling network of caves and spectacular limestone arches. From the carpark, an easy 45 minute return leads you to the big-gun attraction, the Oparara Arch, New Zealand’s largest natural arch, spanning 200 metres in length and 37 metres in height. 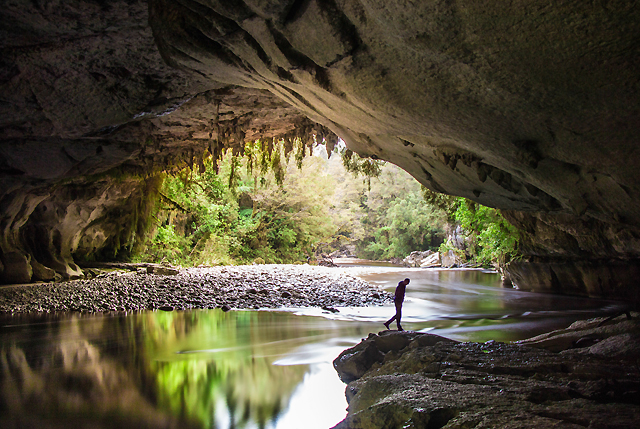 It’s a celestial spectacle, dry and roomy inside, with stalactites and stalagmites. This glorious limestone creation towers above its namesake river, which slinks through its wondrous limestone landscape, wrapped in magnificent podocarp forest, particularly kahikatea trees – the food basket of the forest, prized by native birds for its fruit and seeds. The walk along the fertile limestone terraces also features matai, red beech and silver beech trees, towering above a mossy, fern-filled understorey. Rata, kamahi and rimu are also present in this drop-dead gorgeous valley. 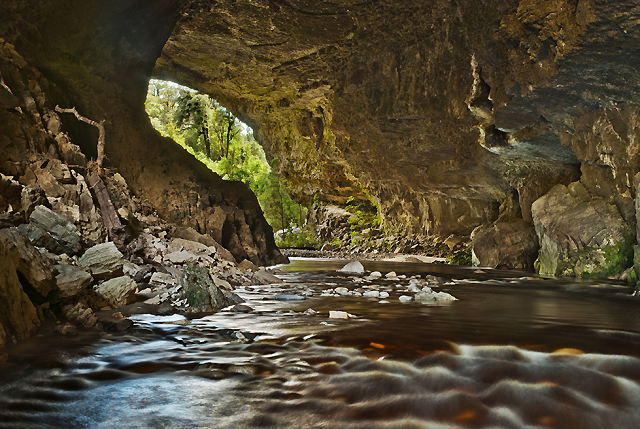 The native birdsong is diverse, cacophonous and notably louder than what you typically hear. The valley is also home the giant snail, Powelliphanta. Like the Kohaihai River, the Oparara’s water is a tea-stained, due to the tannin leaching from decomposed leaves on the forest floor. It’s a common feature in forest areas that incur high rainfall.

If you’re heading to the West Coast via Lewis Pass, you’ll love the section of State Highway 7 between Springs Junction and the Buller gateway of Reefton. The road threads through the verdant beech forest finery of Victoria Forest Park, New Zealand’s largest conservation park of its type, spanning 180,000 hectares, centred on the Victoria and Brunner Ranges. 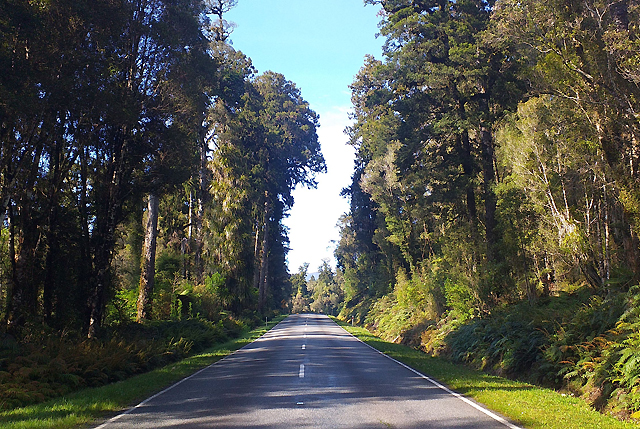 There are gold mining and quartz mining relics in the area, with a variety of sublime hikes, from short strolls to epic, multi day tramps. Eye-catching Reefton celebrates its 150th anniversary in January, with a bevy of events in store to lustily mark the milestone. Be sure to stop by the runaway success story of the Reefton Distilling Company, housed in one of the historic town’s original buildings. 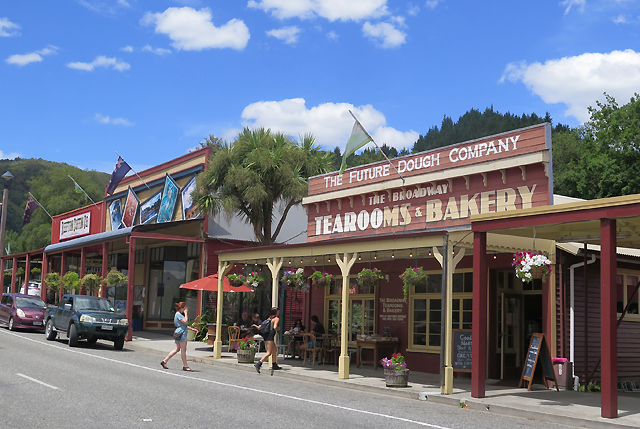 Just two years old, the working distillery, tasting bar and retail store will enthral you as you sample their local botanical gins, vodka and fruit liqueurs. (Tayberry Liqueur is a knock-out – a cross between a blackberry and a raspberry.) Little Biddy Gin is the headliner, scooping a swag of industry awards. To cope with the insatiable demand and to enhance the visitor experience, a new distillery with even more stills and tasting stations is being developed, scheduled to open in March, including their latest venture, Moonlight Creek Whisky. 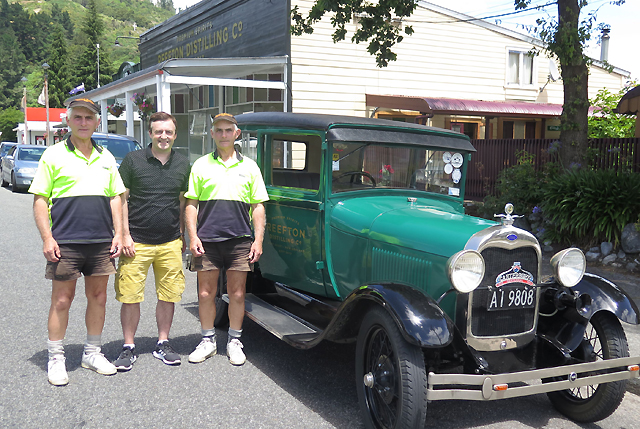 And the legendary McKay Brothers are on hand if you want to take an insider’s tour of this plucky town, spilling forth with secrets and treasures. www.reeftondistillingco.com

For more regional touring tips in this legendary region of New Zealand, head to www.westcoast.co.nz 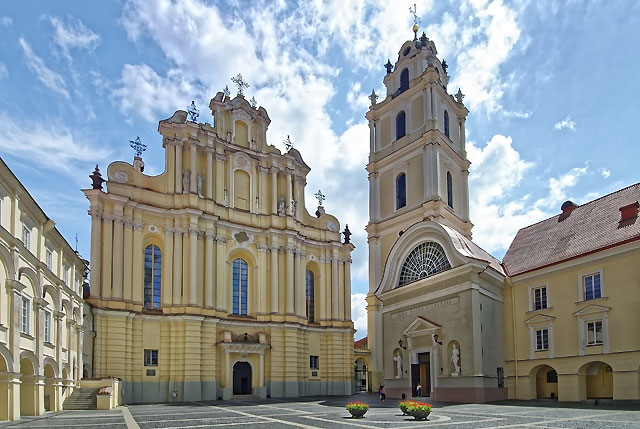 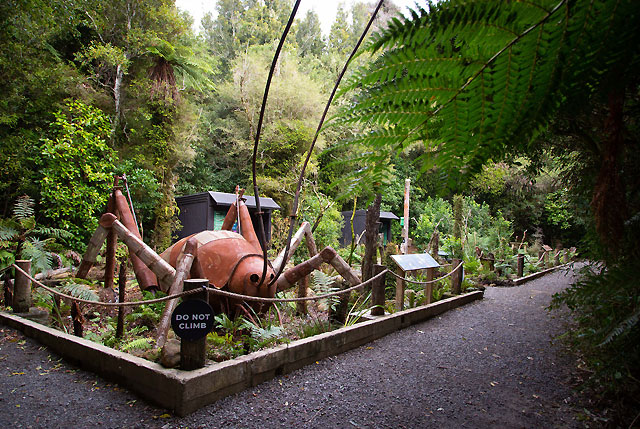 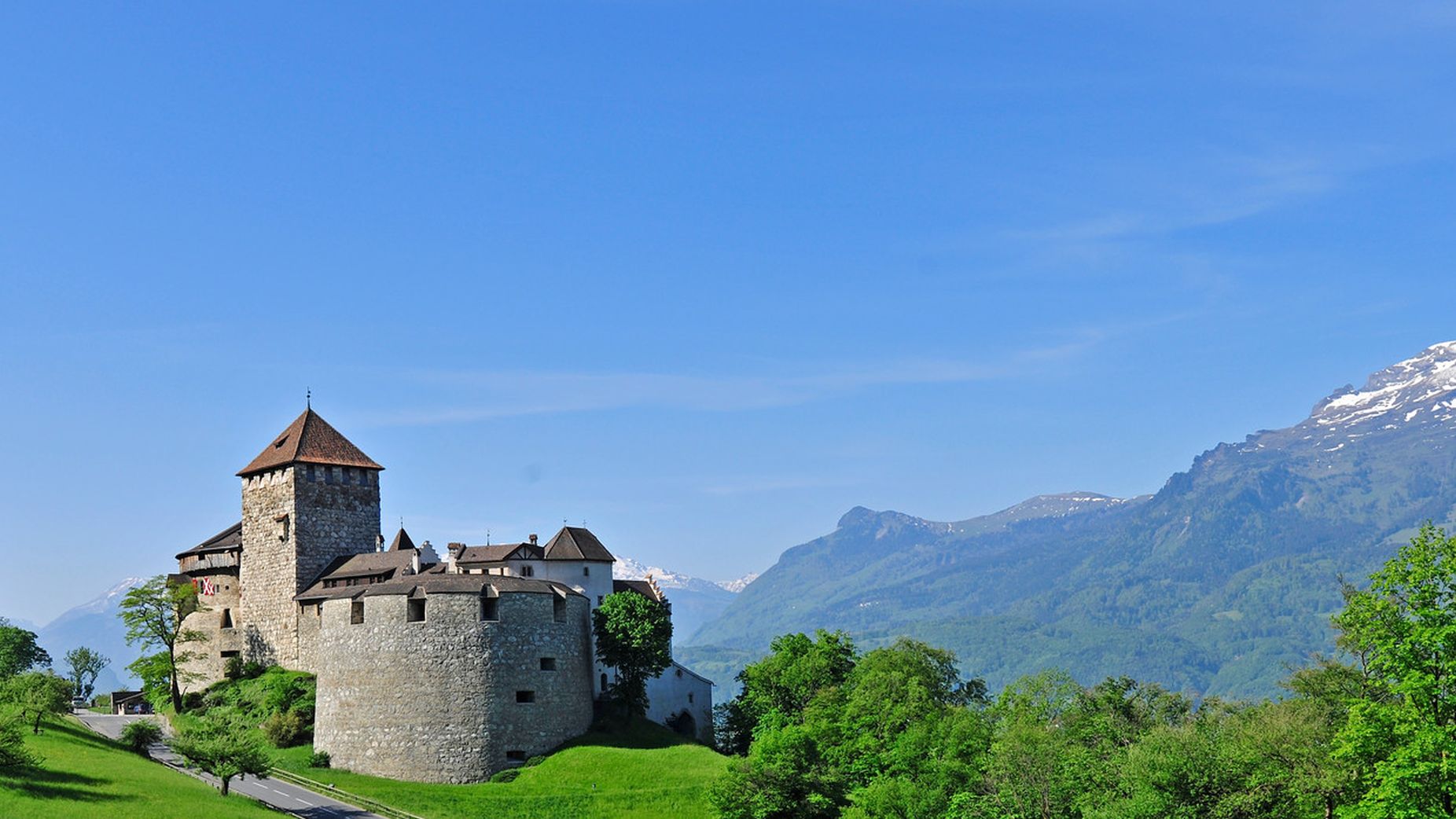 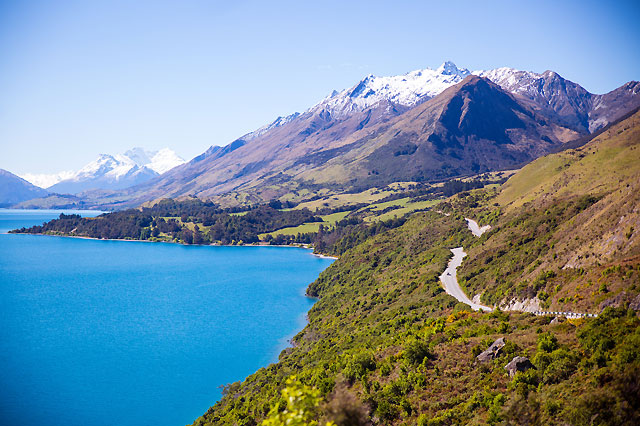