The glossy deep blue water of Queen Charlotte Sound gleamed with photo-shoot-ready perfection. Picton had dawned bright and brilliant; families were taking the air on the velvety lawned waterfront, while perky cafes were humming with trade in their horse-shoe curve edging the harbour, crowned by the creamy-coloured war memorial. Whether you’re looking for a quick dip with Queen Charlotte or a more extended foray, there’s an abundance of cruise, hike and stay options. 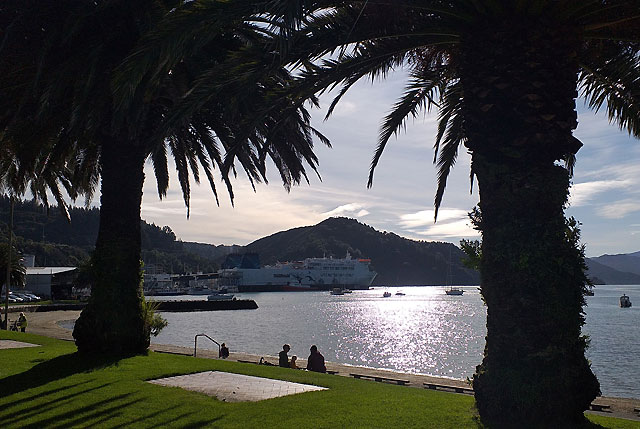 If you’re keen to combine cruising with a spot of walking, a winning option is take a cruise to Ship Cove, before re-boarding the vessel for the home-run from Furneaux Lodge. Pulling out from Picton’s eye-catching marina, we passed by Kaipupu Wildlife Sanctuary, a prized mainland island that serves as a crèche for Kiwi. Brimming with predator-free islands and marine reserves, ogling precious wildlife, spanning dolphins, whales, shags and penguins is an undisputed magnet that has long lured the world to its satiny waters. 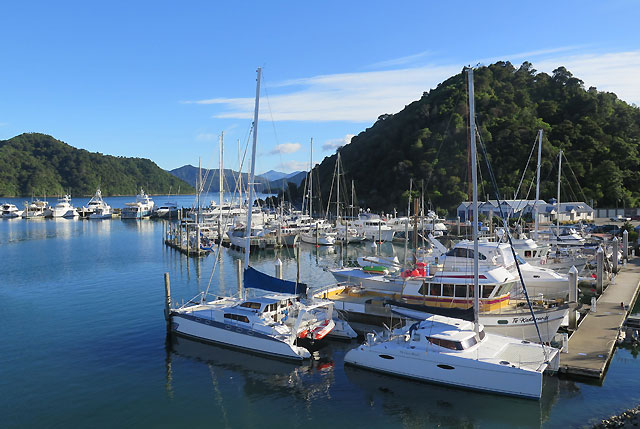 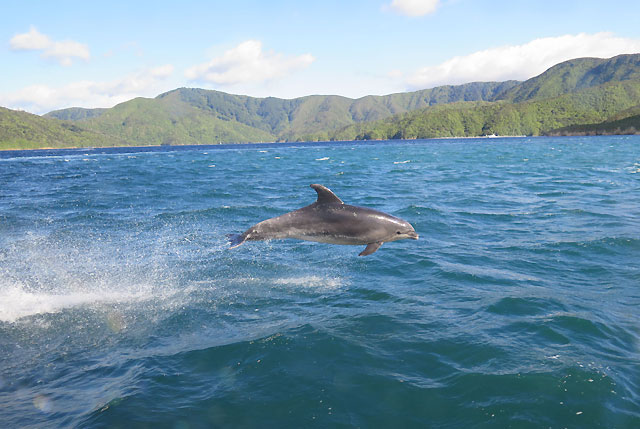 As we approached history-dripping Ship Cove, my Cougar Line skipper pointed out the neighbouring inlet, named Cannibal Cove by Captain Cook’s crew, after watching local Maori cooking up some human remains during one of their visits. Throughout the 1770s, sheltered Ship Cove provided safe anchorage, food, water and timber for Cook and his crew on five separate occasions, marking some of the earliest sustained contact between Maori and Europeans. In total, he spent 170 days here, considered his favourite New Zealand place. 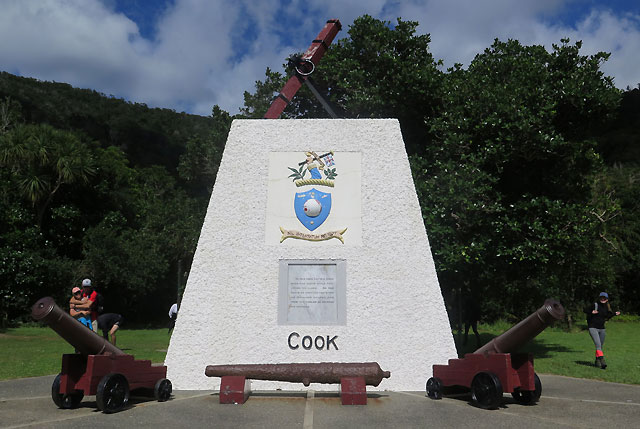 Totaranui iwi were able to reconnect with their Polynesian history, because Cook had Tupaia from Tahiti on board as his translator. I dabbled in the creek where Cook made home brew for his crew before surveying the magnificent Captain Cook monument commemorating his visits to the area. He hoisted the Union Jack and proclaimed sovereignty of the South Island in 1770, at Motuara Island. 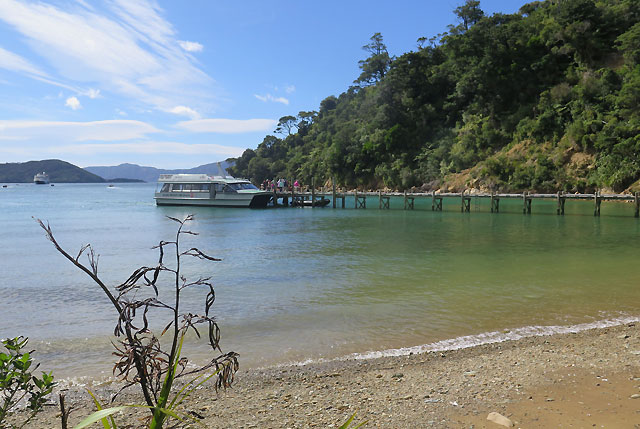 The information panels are illuminating, but what captivated my attention is one of the original cannons from Endeavour, that adorns the monument. The cannon was salvaged from North Queensland, after the Endeavour ran aground on a reef and the crew had to throw numerous equipment overboard, to free the ship.  A gorgeous carved pou whenua (pole) was installed at Ship Cove 13 years ago, illustrating the legend of Kupe and the giant octopus he chased in these waters. www.cougarline.co.nz 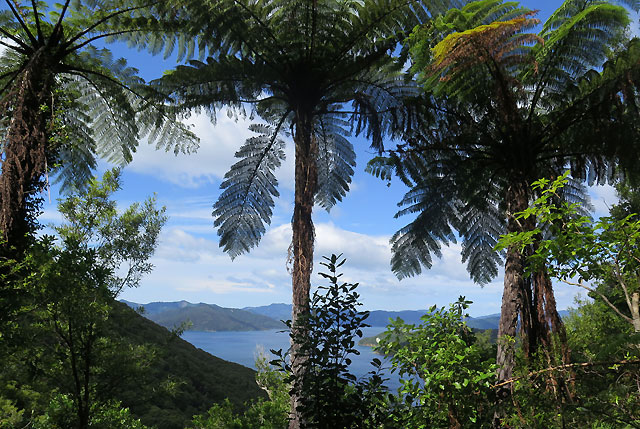 With my walking boots firmly laced up, I struck out for a taster of the Queen Charlotte Track. The full traverse from Ship Cove to Anakiwa is a multi-day affair, but itching for a sample of this celebrated trek, I embarked on the first day’s section to Furneaux Lodge. Fashioned from pioneering era bridle paths, the track was officially opened by DOC in 1991, in conjunction with private landowners, who continue to help its maintenance. The 15km section starts with a steep, thigh-burning haul, climbing away from the beach, through regenerating native forest. But after that initial gut-buster, the rest of the four-hour long trail was a breeze, with gentle undulations up and down panoramic ridgelines. 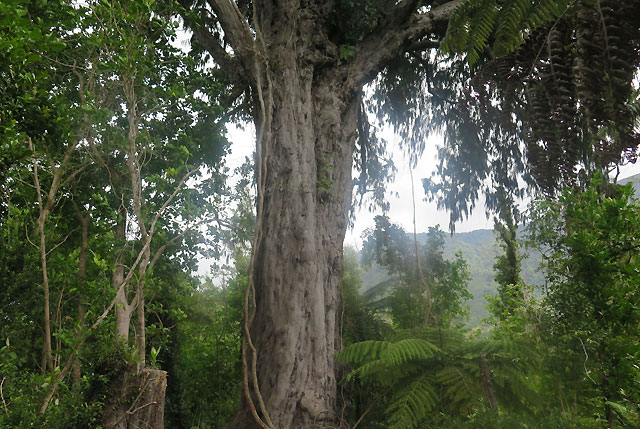 Gregariously chirping fantails, fluting tui calls and the limpid notes dropped by bellbirds were a constant avian soundtrack, as I wended my way through forests of manuka, kanuka, tawa, tree ferns and beech. Curious weka shuffled by, wood pigeons whooshed, but I didn’t see any wild pigs – first released in these parts by Cook. The lookout point at Tawa Saddle serves up blissed-out views across Queen Charlotte Sound, while more pixel-burning vantage points loom large as you descend into Resolution Bay. The final stretch follows a well-graded old bridle path over a ridge and into Endeavour Inlet, threading along the shoreline. An added surprise was the short detour to ogle one of New Zealand’s largest and oldest trees – a 1000 year old Rimu, in Howden Forest. 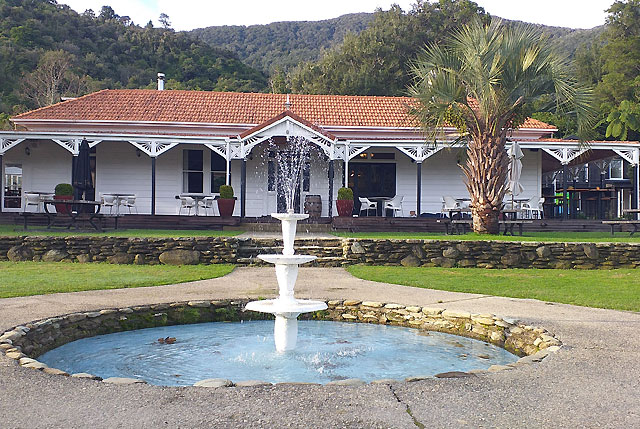 Toddle across the finish line with a flourish, sweetly surrendering to the laid-back hospitality embrace of Furneaux Lodge.  Built by the Howden family over 110 years ago, the original homestead throngs with thirsty patrons, chilling out, swapping tales and lapping up the irrepressible sense of secluded paradise. In July, I leapt at the chance to stay the night at this heritage lodge, luxuriating in one of the recently refreshed in Endeavour Suites. Light and airy with floor to ceiling windows affording expansive views, the elemental escape was accentuated by dramatic overnight storm that ripped through the inlet, as the wind roared like a freight train. 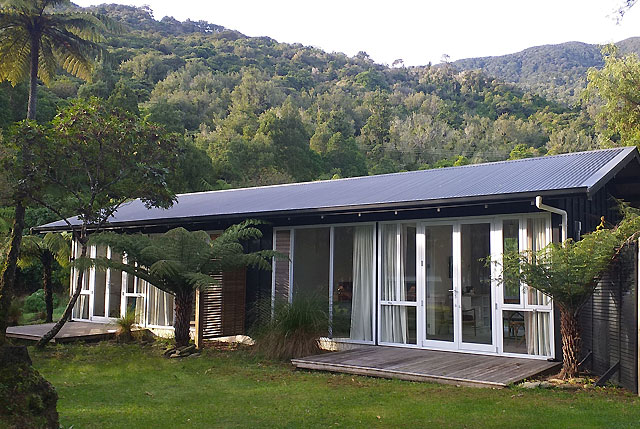 Furneaux Lodge’s expansive lawns, lush and rolling down to the water, are a particularly distinctive feature. It’s just the spot for some lazy snoozing in a hammock. I also enjoyed the hot tub, set to a sizzling 39C. Dinner was fiendishly good. I feasted on popcorn clams, wild pork croquettes and roasted brussel sprouts, washed down with a Boom Town Pelorus Pilsner. 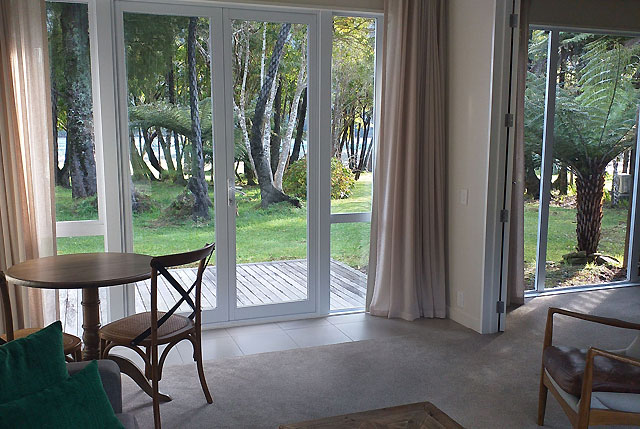 The local wild pork was freshly shot earlier in the week, so there’s a chance are I was chomping down on one of the descendants of those original porkers released by Cook. How’s that for history you can taste! www.furneauxlodge.co.nz 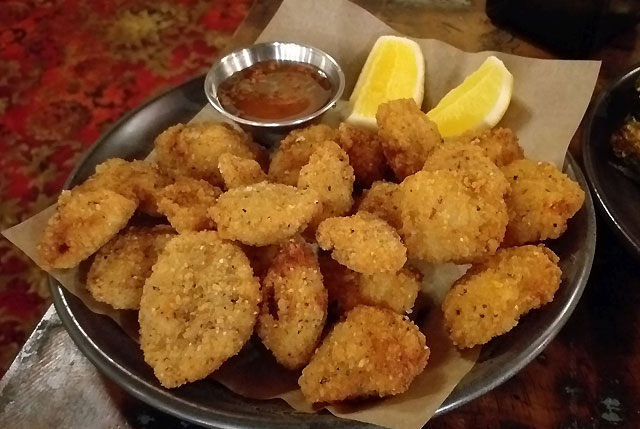 Whisked back to Picton the following morning, I wandered around the embracing waterfront to pay a visit to the riveting Edwin Fox Museum.  It is the world’s oldest preserved merchant sailing ship and the only surviving ship that transported convicts to Australia. Built in 1853 in India, she also carried early migrants to New Zealand and carried troops in the Crimean War. 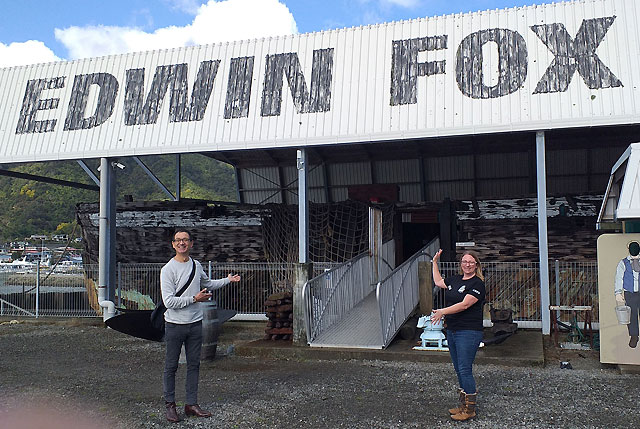 The wealth of history is head-spinning, all beautifully curated in the museum. But unlike the Vasa in Sweden or the Mary Rose in the UK, what I particularly love about the Edwin Fox is you can walk down deep into its immense hull. Evocative smells of yore linger. Up on the deck, I was struck by the bunks previously slept in by Australia-bound convicts, which are duly displayed. 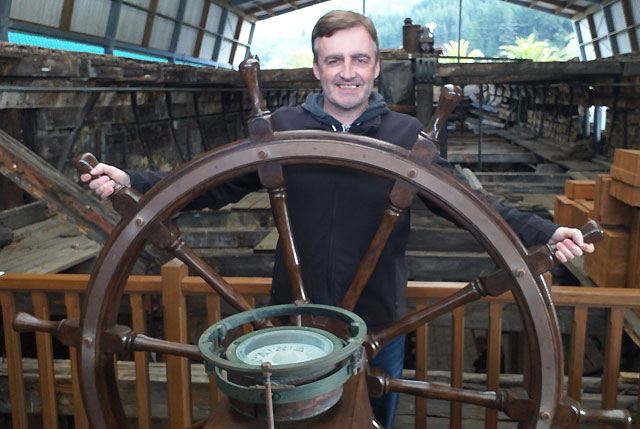 The lovely museum staff told me about some of their exciting development plans including virtual reality experiences whereby you can “meet” some of the convicts who were spirited away to Australia. This preserved ship is truly transfixing. www.edwinfoxsociety.com 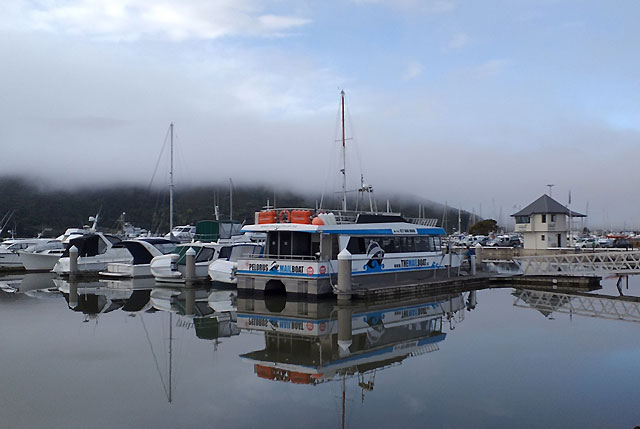 For a second dip with the watery wonders of the Sounds, I joined the Pelorus Mail Boat, which is the longest officially licensed NZ Post mail boat run in the country. Operating for 102 years, this majestic mail run cruise takes you through the far-flung reaches of Kenepuru and Pelorus Sounds  – even into the outer sounds around Maud Island. Undeniably a lifeline to the hardy residents who live in the most strikingly remote pockets, the biggest thrill to match the knock-out scenery were the fleeting encounters with some of the locals. 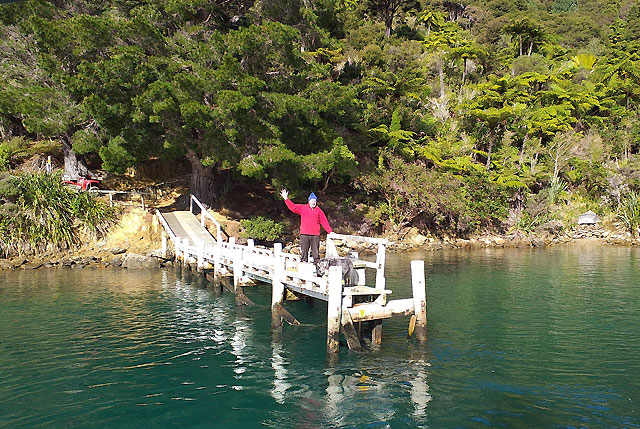 I became acquainted with a chap who operates an online shoes sales business from deep in the Sounds, the online maths teacher, the fabulous Foote family who have been tending to Wilsons bay Farm since 1881. Five generations of Footes and still going strong. 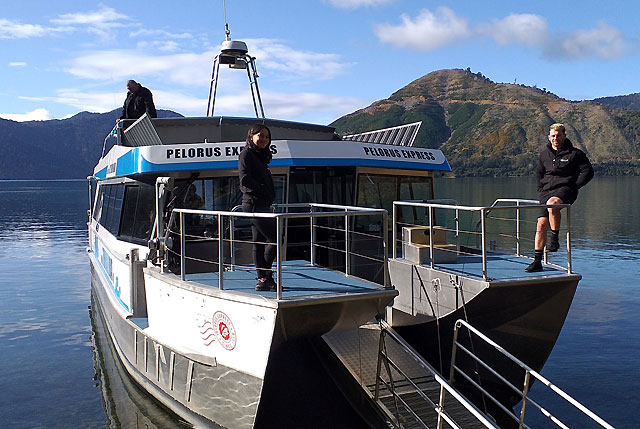 We also met Dave and his dog Billy. Dave’s nickname is “The Conductor”, because he’s been struck by lightning twice! My skipper Leroy and assistant Tiria were effervescent hosts, as they delivered mail and groceries across the Sounds. I lost count out how many dogs lined up on the jetty with their owners to eagerly greet the boat. Every dog was given free biscuits by Tiria. 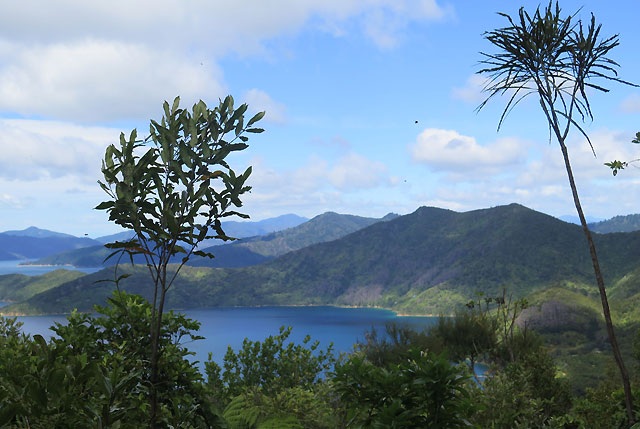 I also happily took up the option to enjoy a short bush walk on the Francis Dillon Bell track to heart-stealing Jacobs Bay, with soul-stirring views across Pelorus Sound. It was a soothing, serene encounter with the Sound of silence. No wonder the Mail Boat is the most popular cruise in the Marlborough Sounds. It’s a must. www.themailboat.co.nz 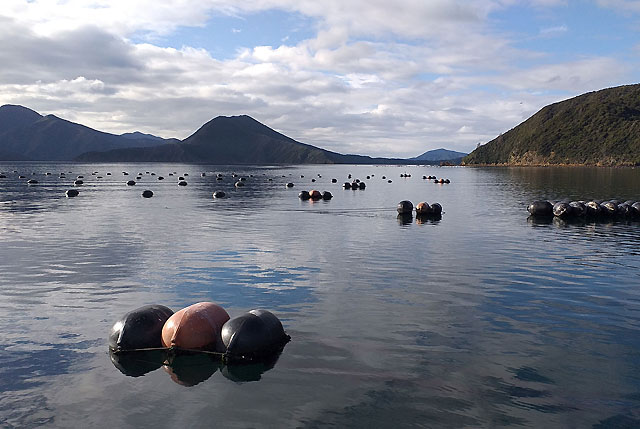 Before arriving back into Havelock, my sortie on the Mail Boat ventured through a mussel farm, which festoons many quiet stretches of water in Pelorus Sound. It’s where 70% of New Zealand’s mussels are grown, of which 70% are exported worldwide, notably to China, Japan and the USA. Feeling peckish, I popped into Mills Bay Mussels where I was royally treated by Becky and Rose. 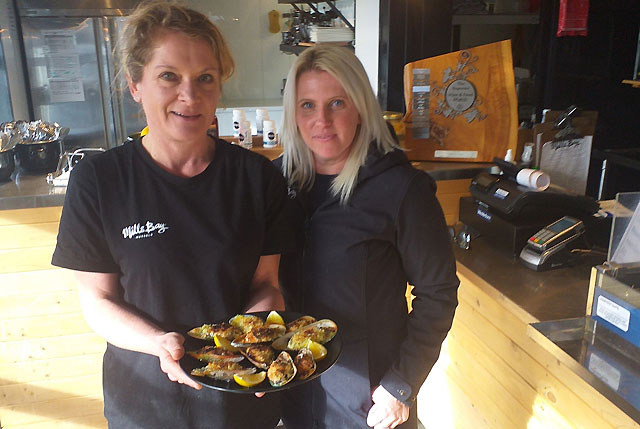 The Mills Bay Mussels Tasting Room & Eatery is located in the Havelock Marina – right at the front of their Mussel Packhouse, so you can gorge yourself stupid on the freshest mussels imaginable. Like a gannet, I downed half a dozen au natural raw shucked mussels, drizzled in a lovely Asian mint dipping sauce or mignonette sauce. Then Becky served me some gorgeous Garlic Butter Mussels, grilled on the half shell with a crispy crumb. Heavenly! www.millsbaymussels.co.nz 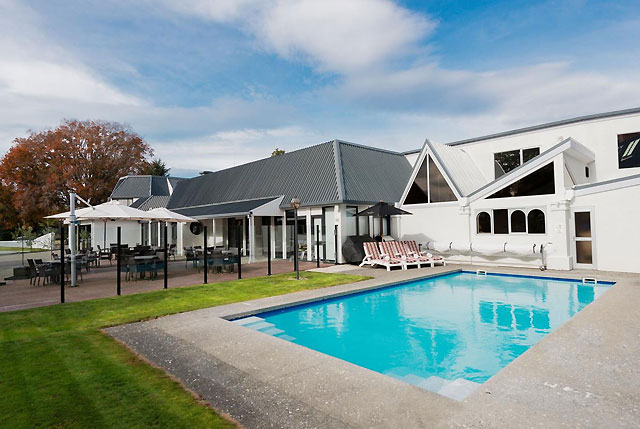 Less then 30 minutes away, I dossed down in Blenheim, readying myself for some intrepid wine tasting. In the heart of town, just steps from languid Seymour Square, Scenic Hotel Marlborough is perfectly positioned, a modern and stylish property with superb facilities including spa, pool, sauna, restaurant and bar. You’ll enjoy free WIFI, spacious air-conditioned guestrooms with flat-screen SKY TV and super-comfy bedding. The onsite Mondrians Restaurant & Bar is open each day, offering modern à la carte dining, showcasing the best local produce and an excellent selection of Marlborough wines. www.scenichotelgroup.co.nz 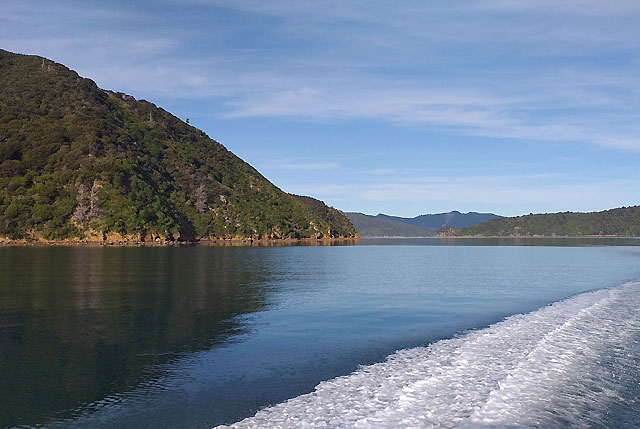 Whether it’s the watery wonders of the Sounds, wine-touring, gourmet produce or heritage treasures, bountiful Marlborough is bursting with touring options. Make your first port of call the region’s official destination website. https://marlboroughnz.com/visit