One of my favourite Kiwi road trips tends to be mistaken as an unsung feeder route, stitching the West Coast’s Glacier Country to the glittery allure of Wanaka and Queenstown.  Rushing is the problem. Anyone who races through the ravishing Haast Pass Highway is unwittingly short-changing themselves. Set aside the time to devour its epic glories. As the last mountain pass to be constructed over the Southern Alps and only fully chip-sealed in 1995, this 140km-long panoramic alpine pass still exudes a “final frontier” sense of escapism as it threads its way through unmodified beech forest. The route had long been used by Māori warriors and greenstone (pounamu) gatherers, as they traversed the Main Divide. 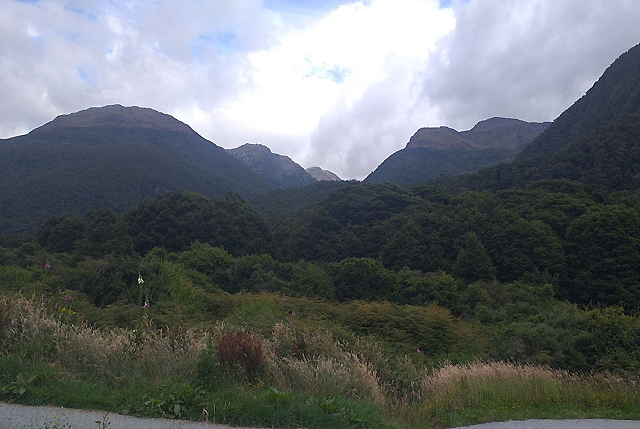 Julius von Haast, a rather ego-centric surveyor who crossed the pass in 1863, shamelessly named the route after himself, despite being beaten to the punch by a gold prospector, Charles Cameron, who achieved the feat a few weeks earlier. The provincial geologist also contributed immensely to the fearsome bird to later carry his name, the extinct Haast Eagle. (Meeting its demise after the Moa was hunted to extinction around 500 years ago, this monstrous eagle had claws as large as a modern-day tiger’s.) 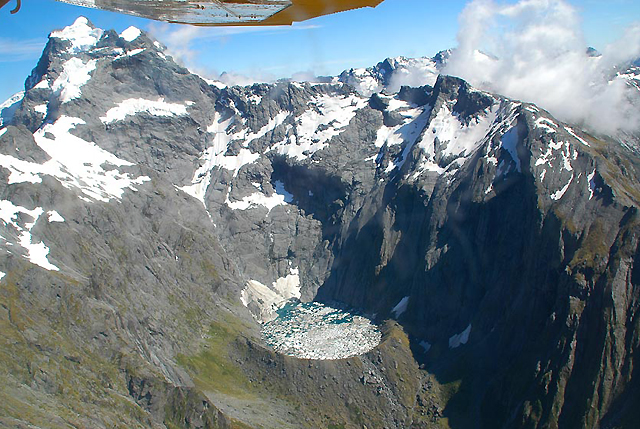 For the next century, narrow bush tracks were the only means of passage across Haast Pass, until the shingled highway officially opened in 1966. I’ve just completed another trip through the pass in the beating summer sunshine, although the alpine aesthetics are certainly accentuated when the cooler months carpet the peaks in snow.

That being said, the higher peaks that scratch at the sky, are still snow-dappled. So what are the unmissables along the mountain highway? Starting from southern entrance in Wanaka, call by the cobalt-blue expanse of Lake Hawea. 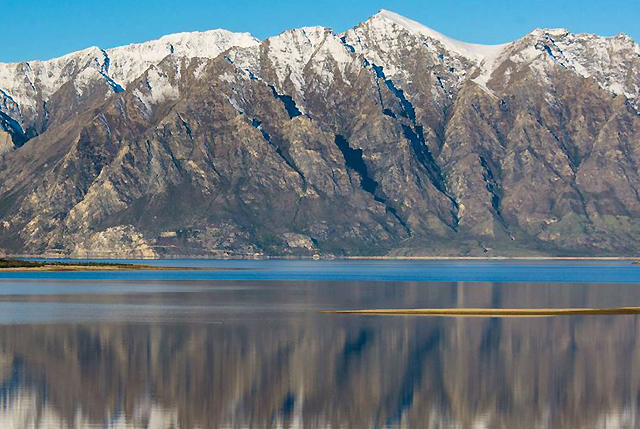 Far less trafficked than its neighbouring lake, it’s a majestic body of water with a pebbled beach and magnificently iridescent water – like liquid cellophane. Heading north, the two glacial lakes, long and narrow and carved from ice, nearly kiss each other at the suitably named “The Neck.” Situated almost side by side topographically, the two lakes were once connected, but are now separated by this narrow neck of land, or isthmus. The sparkling lakes are bracketed by undulating hills of swaying golden tussock, while the striking spire of Mt Aspiring pierces the skyline. 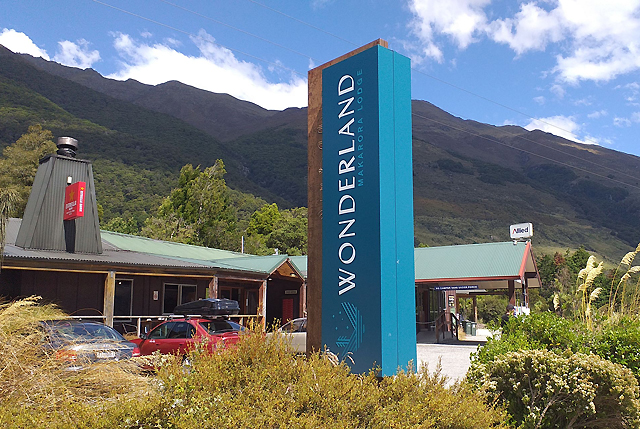 You then enter the Heidi-country deliciousness of the Makarora Valley, where the colour palette swiftly shifts from sun-scorched gold to verdant pastoral green. Take the Makarora Bush Walk from the roadside, an easy 15 minute loop circuit that threads you through a priceless patch of primeval podocarp forest. Previously, much of the Makarora Valley’s podocarps were logged to support and supply the burgeoning goldmining towns in Central Otago. 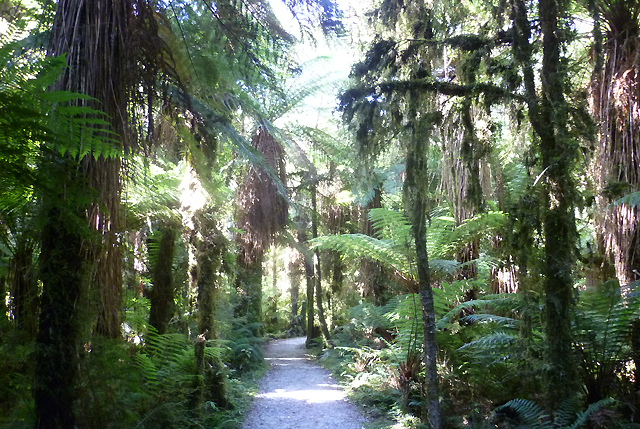 The logs were floated down the river and across Lake Wanaka, leaving only the silver beech trees to form the canopy. Today, this safe-guarded remnant of the Makarora Forest houses some of New Zealand’s tallest timbers, reaching back to the Jurassic age of dinosaurs, like the 60 metre tall specimens of kahikatea, matai and rimu, soundtracked in birdsong. 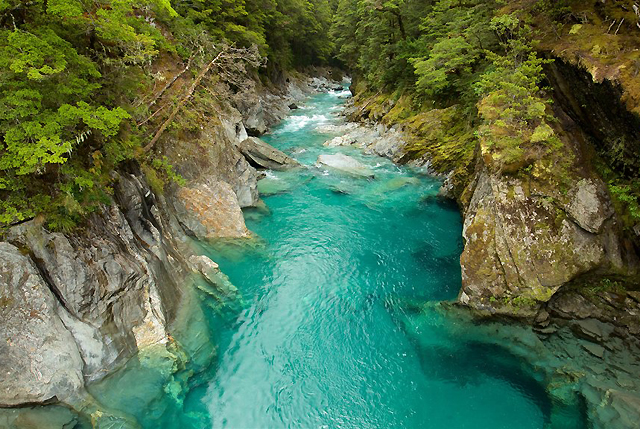 Once you’ve had a taste of the podocarp tall boys, head to the Blue Pools, accessed via an effortless 30 minute return walk through silver beech forest, across boardwalks and a swing-bridge to the translucent pools in the Makarora River. These serenely still azure pools are a feeding ground for large brown and rainbow trout, which you can spot with crystal-clear precision from the bridge. The glacier-fed water is so gin-clear, the resident fish seemingly appear to be suspended in air. 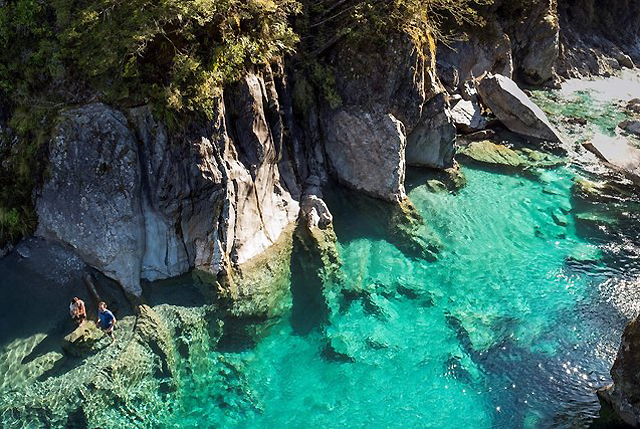 A dreamy spot to soak up the splendour of the wilderness is at Wonderland Makarora Lodge. First opened in 1959, A-frame chalets were progressively built over the decades, in addition to the camping ground, restaurant, cafe and bar. It’s a wonderful holiday bolt-hole, enrobed with nature’s finest.  You’ll find the lodge listed on Booking.com who are right across our great backyard. Stake out great value stays with complete flexibility and convenience, no matter your budget and preferences. www.booking.com 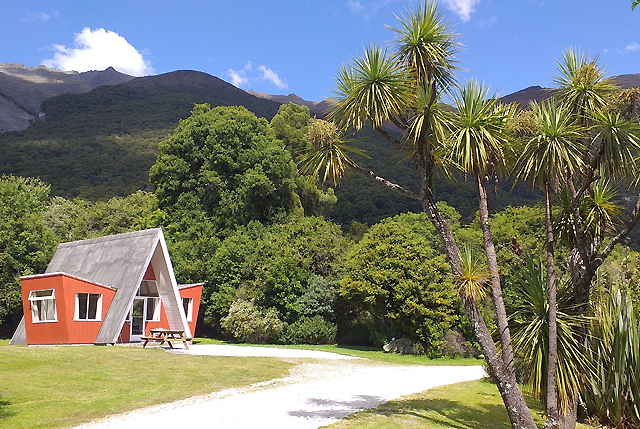 A variety of backcountry can be booked at the lodge, including jet boat tours on the Wilkin and Makarora Rivers and scenic flights across the ancient river valleys of Mt Aspiring National Park. The ultimate day-trip is the “Siberia Experience.” It starts from Makarora, right across the road from the lodge. Southern Alps Air will fly you into the Siberia Valley on their bright yellow Cessna 185 Skywagon nicknamed “Buttercup”, landing on a remote grass airstrip wrapped in towering mountains, before a three-hour walk to a jet boat pickup point, where Wilkin River Jets will take you back home on a high-octane trip along the braided river. www.siberiaexperience.co.nz 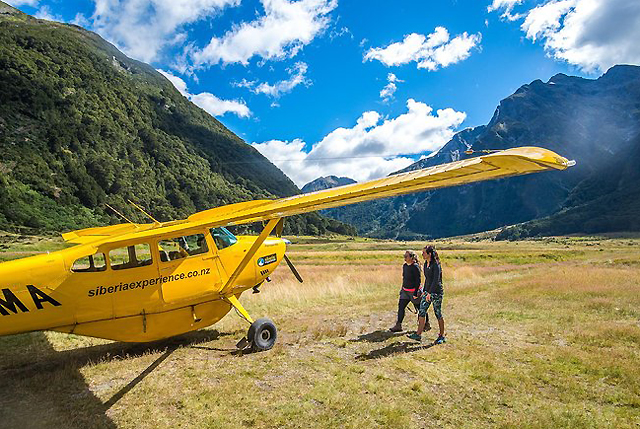 Thirty minutes north from Makarora on the Haast Pass highway, amid the seraphic landscape of towering peaks and rainforest, welcome to a wonderland of waterfalls. My previous ho-hum nonchalance about falls was upended by the Haast Pass offerings. First up, Fantail Falls. Despite a plethora of native birds whooshing and trilling overhead, this waterfall doesn’t take its name from the birdlife, but because the base of the fall splays out in a triangular fantail-shape. 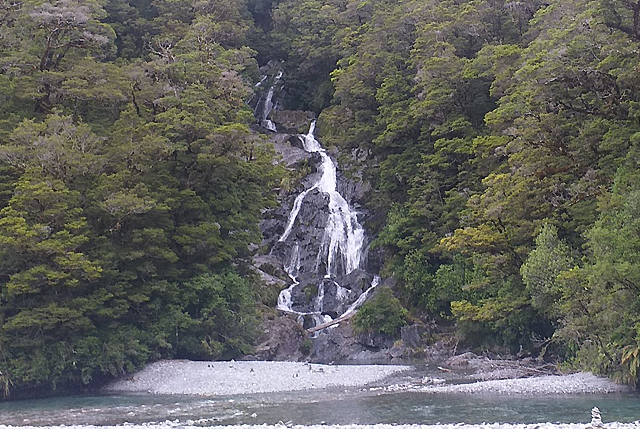 This would be quite the water feature, to impress your guests in the garden.  Apparently, these are the most photographed of the area’s smorgasbord of falls, but it’s Thunder Creek Falls, further up the road, that struck me as the biggest pixel-burner. Hurtling down into the Haast River from a 28 metre high drop, Thunder Creek is a boastful, riotus and rowdy exhibitionist, powered with the grace of a fire hydrant.

The waterfall height also serves as stark lesson on just how high the glacier field was during the last ice age, 12,000 years ago.  Above the treeline at Thunder Creek, clinging implausibly to the vertiginous slopes, you’ll notice gardens of snow tussocks, dainty flowering herbfields and mountain buttercups sprouting, flourishing against the odds. For more vertical aqua magic, Roaring Billy is a 25 minute return walk, through a densely vegetated forest grove of emerald  tree ferns – an absolutely enchanting walk that Weta Workshop could not improve on. 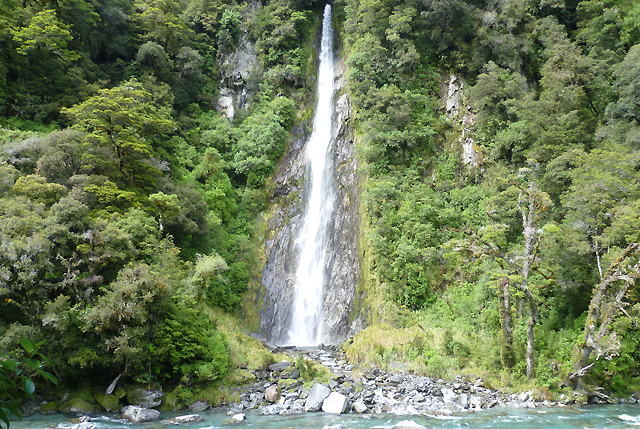 But the highway’s most theatrical trump card is the ominously named Gates of Haast. This narrow highway crossing over the Haast River, hemmed in by canyon-like cliff walls and gigantic boulders of tumbling schist, is a striking sight as the surging waters thunder through the gorge like a freight train. Adding to the scenic medley, the foaming surf of the Tasman coastline shuffles closer into view, as the highway skirts undulating forests that appear to float in the tea-stained waters of the lowland swamps, strung around Haast. 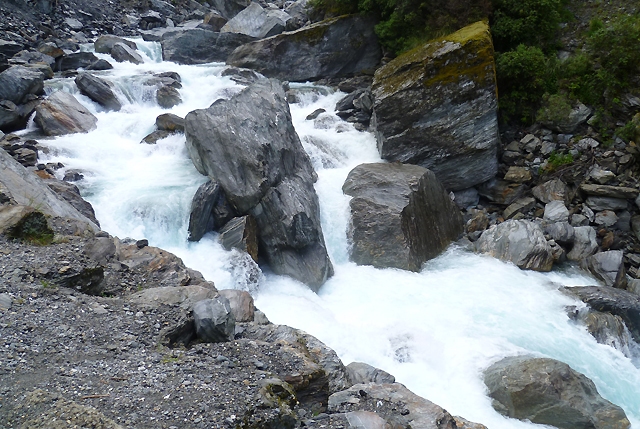 Break up the trip by staying the night in Haast township, giving you room to roam nature’s rampant artistry in this World Heritage-protected wilderness region. Haast township was originally a Ministry of Works camp for the road construction workers. It is now principally a service centre with an excellent DOC visitors centre and a long-time beacon of West Coast hospitality, the Haast Heartland World Heritage Hotel. 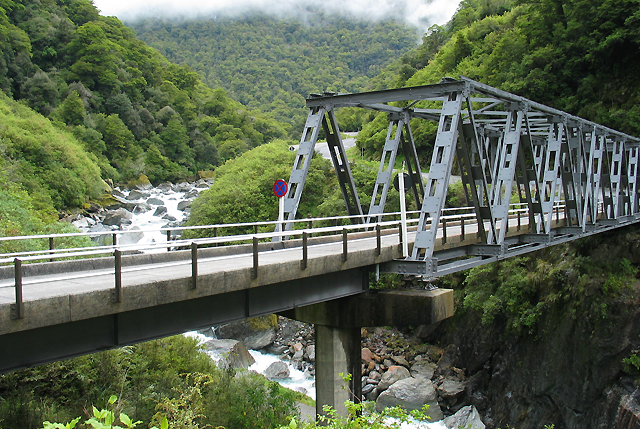 The hotel’s Frontier Café & Bar is cheerful, relaxing and toasty with a great-value menu including including Westland rib-eye steak, Mount Cook salmon and Jackson Bay seafood chowder; but the great fame to claim is undoubtedly West Coast Whitebait, freshly captured from the upper reaches of the Haast River. 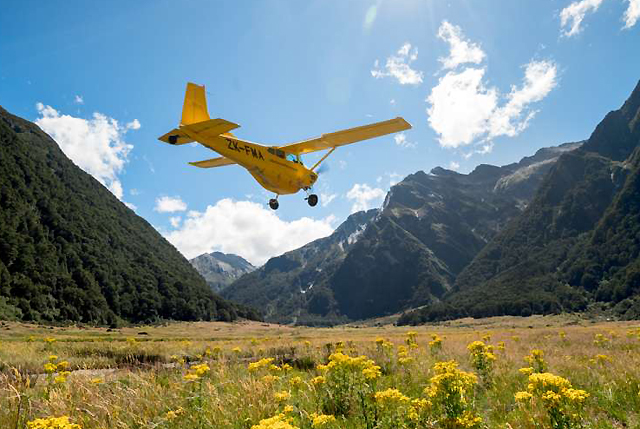 Adding to the drama, the nation’s beefiest earthquake belt, the Alpine Fault, courses through Haast township. With the Southern Alps and the lush, primeval rainforest on your doorstep, could there be any better way to start your day refreshed, soundtracked to the morning chorus of the kaka, kea, kereru, tomtit, fantail, tui and bellbird in song? This is a roadie in excelsis. 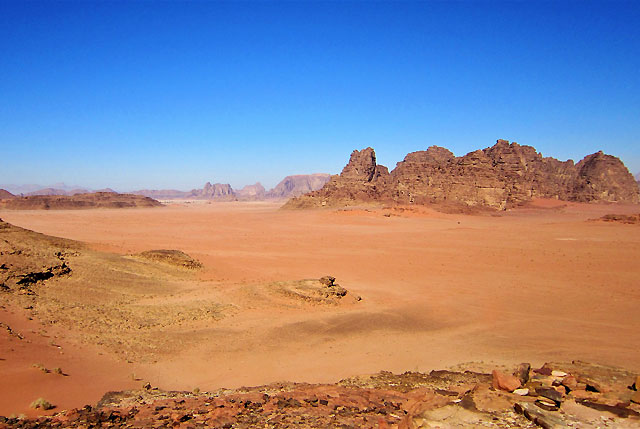 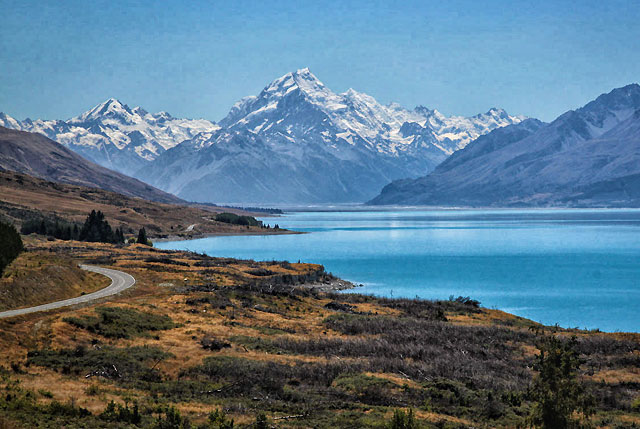 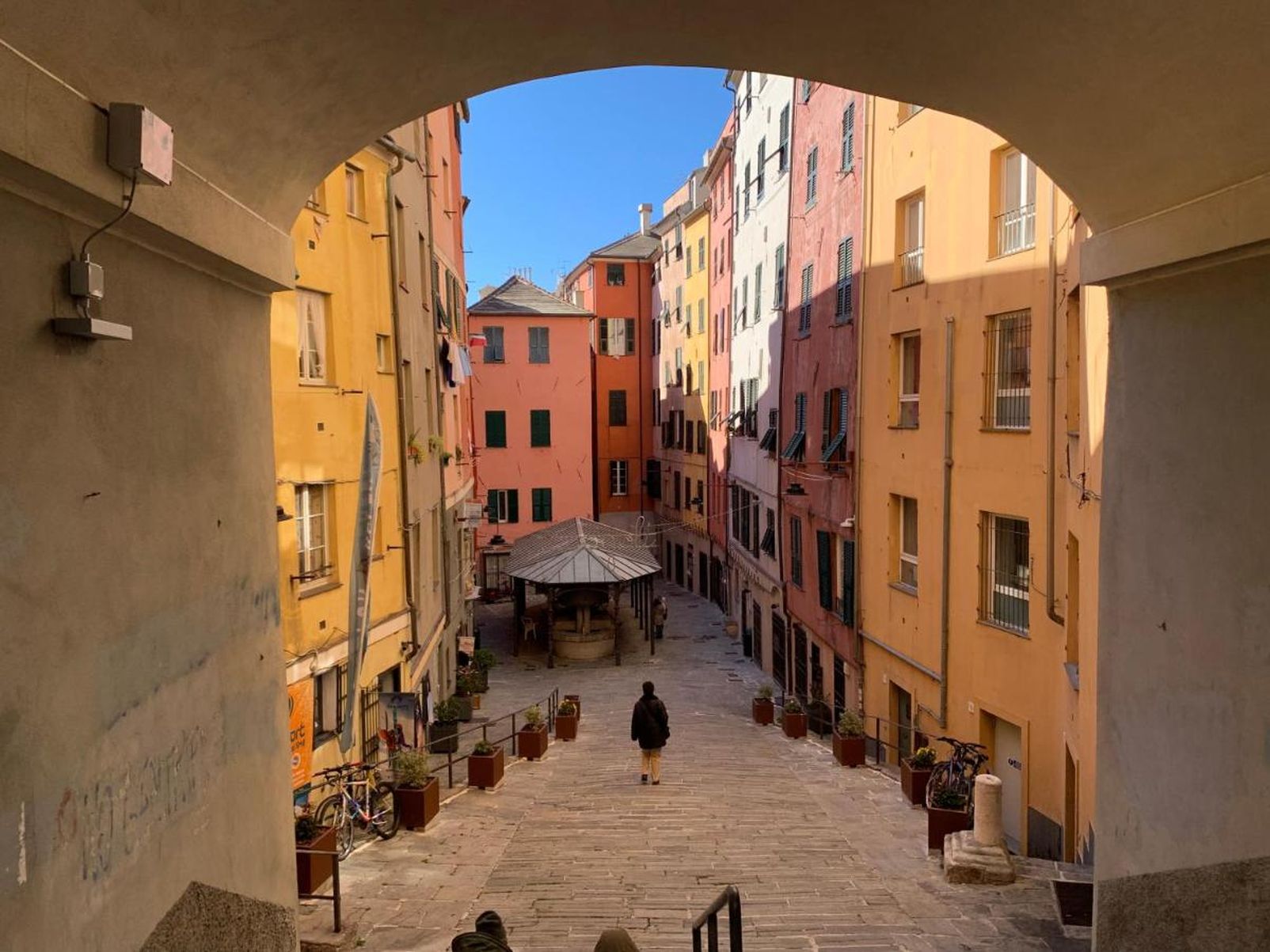