Situated in the south-west corner of Kruger National Park, where the Sand River swerves south to meet the Sabie River, Sabi Sabi Game Reserve provides sanctuary to a staggering cast of Africa’s revered creatures. Bone-dry riverbeds reveal the passage of lions or a scuffle between hyenas, waterholes lure elephants and impalas, and an acacia tree might just hold a leopard guarding its prey. 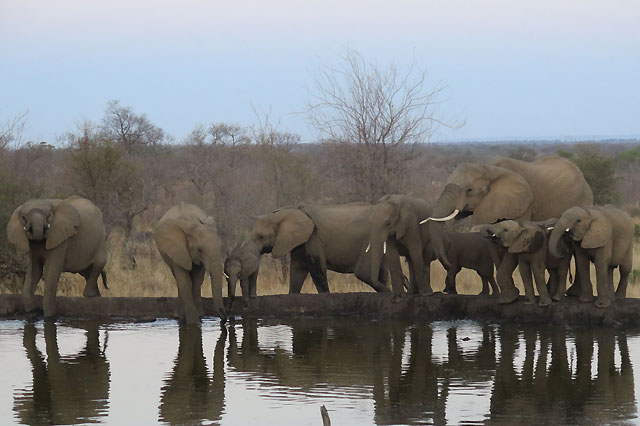 Interspersed among the low woods and grasses, the four lodges of Sabi Sabi offer a world of choice, themed as Yesterday, Today and Tomorrow. I plumped for the latter, the ultra-contemporary, next-level, out-of-the-box extravagance of Earth Lodge. This irresistible gem of modern architecture is daring and ethereal, etched into a hillside so ingeniously, it’s barely visible even to the animals. 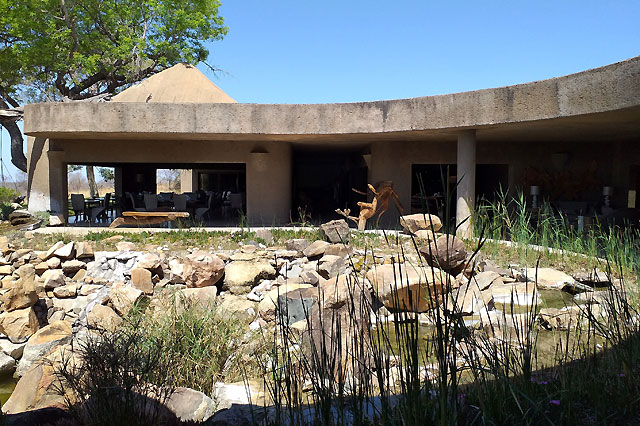 The lodge reveals itself in a series of sensory revelations. On arrival a hidden corridor leads you down to the open reception area, bracketed by a panorama of uninterrupted bushveld, as tinkling water features awaken your senses. This masterpiece of artistry and innovation has seen Earth Lodge already showered in praise as being the most environmentally sensitive lodge in Africa. 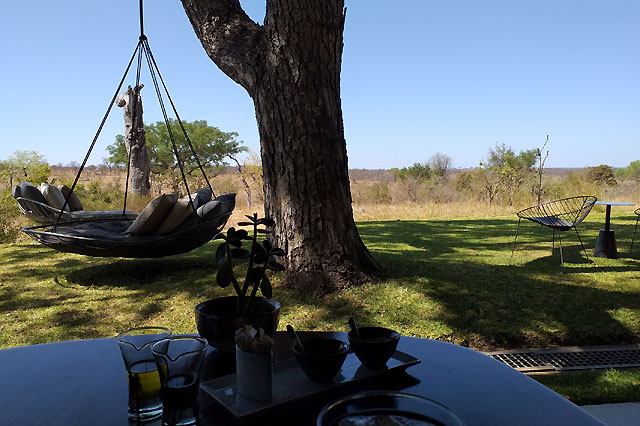 Enjoying my first breakfast, the waiter remarked that “yesterday morning we had elephants walking on the roof.” That’s quite the stress-test. This triumph of elemental design makes clever use of texture, light and space. You feel at one with nature, in your earthy-hued roost, loaded with luxury comforts galore. Earth Lodge is a bespoke and exclusive haven of tranquillity, comprising 13 nature-inspired suites with high-end amenities and private plunge pool, including the sumptuous Amber Presidential Suite. 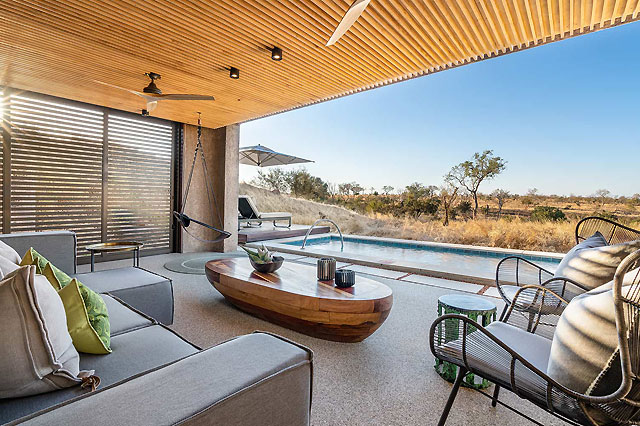 The spacious restaurant, bar and lounge radiates across the length of the lodge, like a front-row, ringside seat on the spell-binding landscape. A bunch of foam-flecking warthogs sauntered right up onto the lawn as I was noshing on a roasted rare ostrich wrap for lunch in the outdoor dining area, blithely indifferent to my presence. It was just the first of countless pinch-yourself moments. Later that day, while savouring an icy Amarula sundowner, a parade of giraffe nonchalantly ambled by. As did some zebra, springbok, kudu, nyala…even a honey badger. It was like the zoo coming to you, unplugged, unrehearsed and always unpredictable. 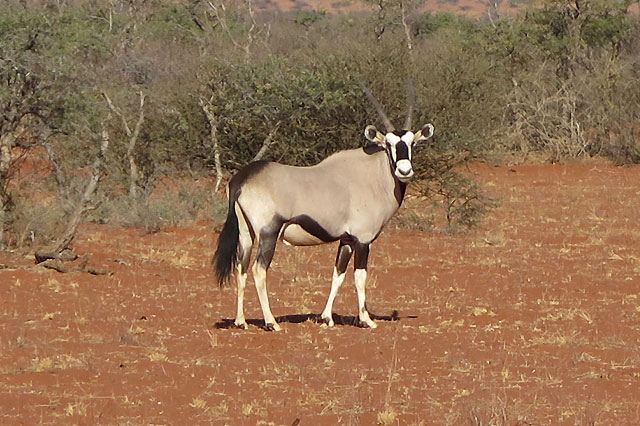 Built in complete harmony with its surroundings, my enormous suite was sculpted into the earth, with rough mud walls serving as a reminder that you are in wild Africa. Panoramic windows look out over your private plunge pool and beyond to your own patch of untamed African bush. Furnishings are tasteful and modern, complementing the earthen surroundings with light colours to bring an airy feel to the rooms. 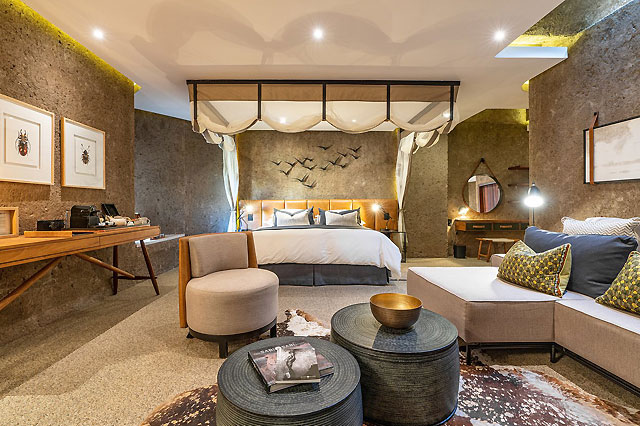 The bed is colossal, and in the bathroom a huge stone tub offers the chance to wallow in bubbles whilst admiring the wildlife from your window. Your personal butler is just a short call away, underscoring the unrivalled opulence that radiates across the Earth Lodge safari experience. Dolce & Gabbana had just been in residence, while during my stay, I shared a few beers with Daniel Radcliffe’s stunt-double from the Harry Potter films. The vaulted wine cellar has to be seen to be believed, stocked with thousands of bottles of South African and global vintages. The on-site Amani Spa offers a comprehensive menu of treatments incorporating local minerals and herbs. 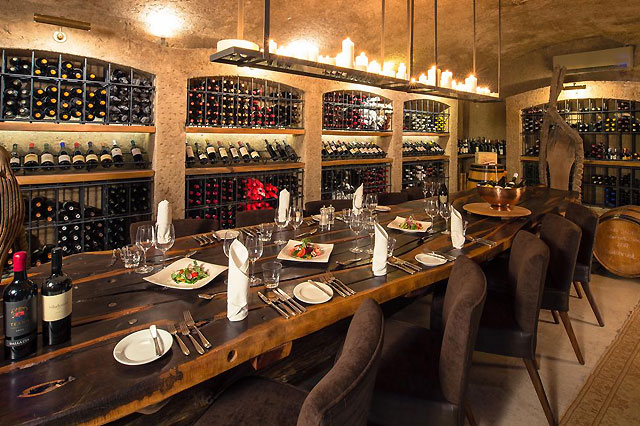 My wildlife experiences were exceptional, with morning and afternoon game drives under the command of my trusty ranger, Ally Ross, and tracker Pedro. The fresh shoots of spring were spectacularly greening up the dusty brown bushveld, which was abuzz with life and vitality. The air was pregnant with promise. Ally’s infectious passion, commanding knowledge and unquenchable zest for Africa’s nature was intoxicating. 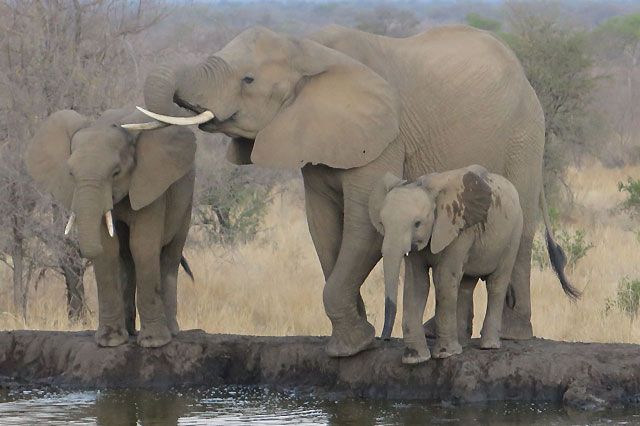 The birdlife at Sabi Sabi is particularly enthralling. I spotted a Zazu-lookalike, a yellow-billed hornbill; the African fish-eagle wheeled above; the lilac-breasted roller enchanted with its carnival of primary colours; the kori bustard strutted with self-importance; and a flock of lappet-faced vultures stared down from the trees oozing intimidation. 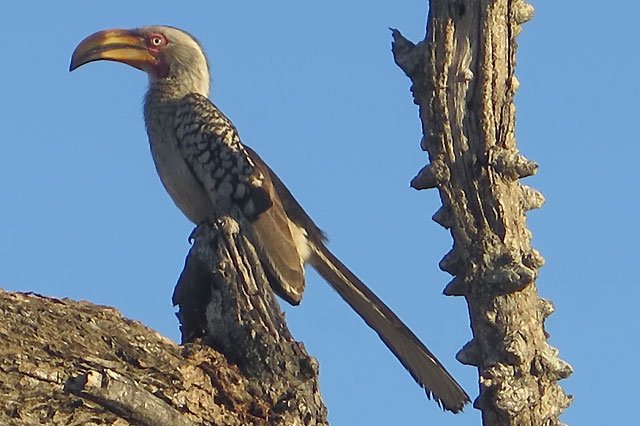 Ally mentioned their eyesight is so impressive, they could read a line from the newspaper 2km above ground. Almost 5% of the world’s bird species can be savoured in this storied pocket of South Africa. On our game drives, the most superlative wildlife experiences including fawning over a large herd of elephants splashing about at a waterhole. The baby elephants are particularly endearing. Marching towards the waterhole, it put a new spin on the phrase, “main trunk line.” 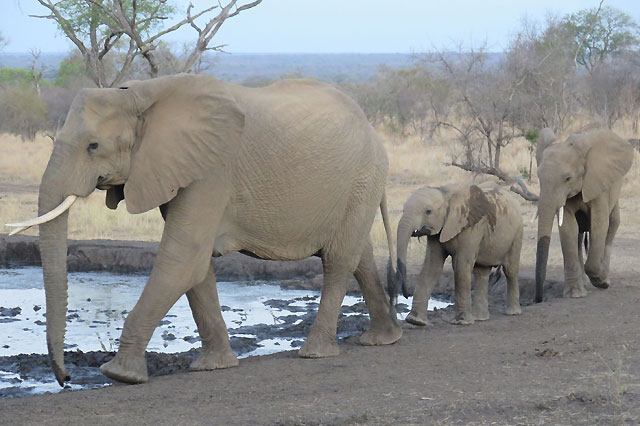 A vast horde of wildebeest soon followed, binge-drinking from the waterhole. A very contented leopard couldn’t care less that we ogled him up-close as he devoured the remains of the duiker he had caught for lunch. After catching the mammal, he hauled its carcass up to the top of a marula tree, before carting it back down for a sustained chomp. 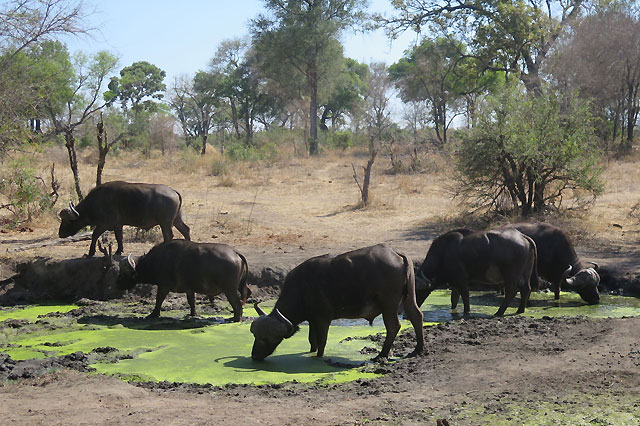 Vervet monkeys abound in these parts, the local monkey mafia, full of mischief and swift home-invaders if you happen to leave your accommodation door open. I was thrilled by more intimate sightings of white rhinos and heart-stopping close encounters with lions lounging in the grass. My unsuspecting tracker, Pedro, nearly ended up on top of a lioness, who flashed her amber eyes at him, as we rounded a corner in the land cruiser. 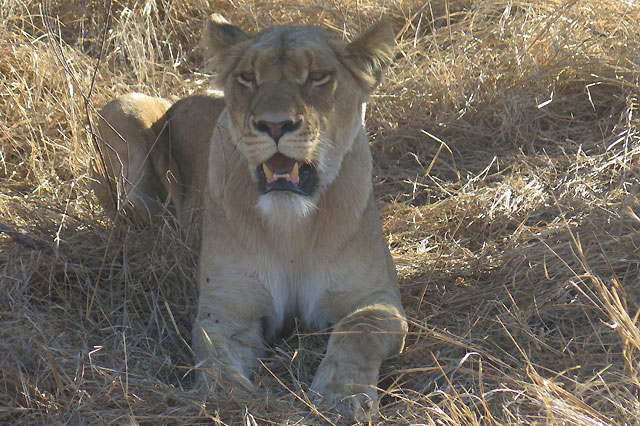 Ally didn’t seem too phased, explaining that lions will give you a warning snarl that you’re too close for comfort, before they’d actually attack you. I’m pleased we didn’t put that to the test. As the blood-red sun saturated the terrain in a rose-tinted hue, Ally and I clambered up a craggy outcrop that could well have doubled as Pride Rock in The Lion King, to soak up the soul-rinsing vista of untamed wilderness one last time, saluting proceedings with another Amarula. Earth Lodge and Sabi Sabi Game Reserve is a bewitching, starry-eyed experience well worth the splurge. You never know just who you might bump into. 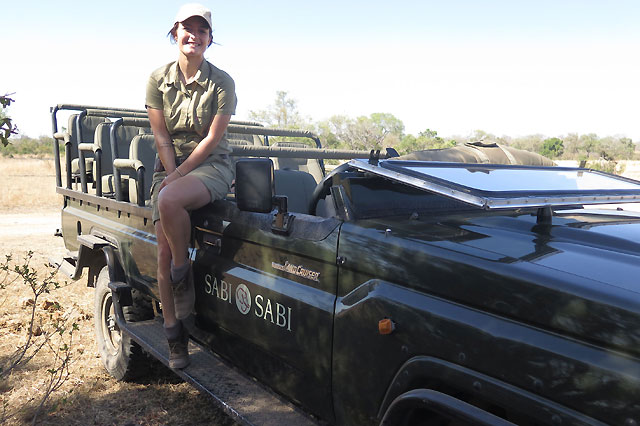 With those pesky tourist visa requirements recently disbanded, now’s a great time to visit South Africa and revel in the wildlife at Sabi Sabi Game Reserve. World Journeys are experts in tailor-made travel to South Africa and elsewhere across the continent. Contact World Journeys 0800 117311 or go to www.worldjourneys.co.nz/south-africa 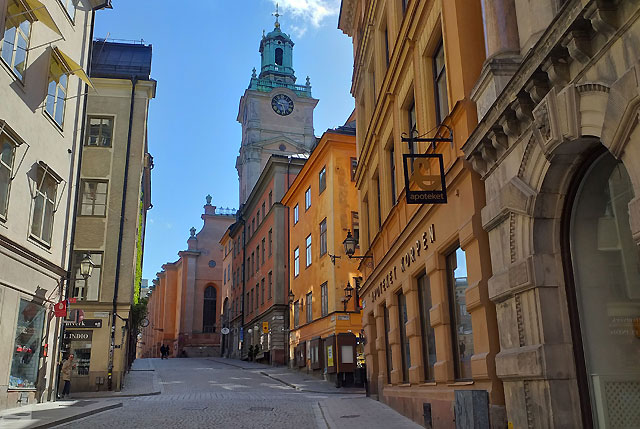 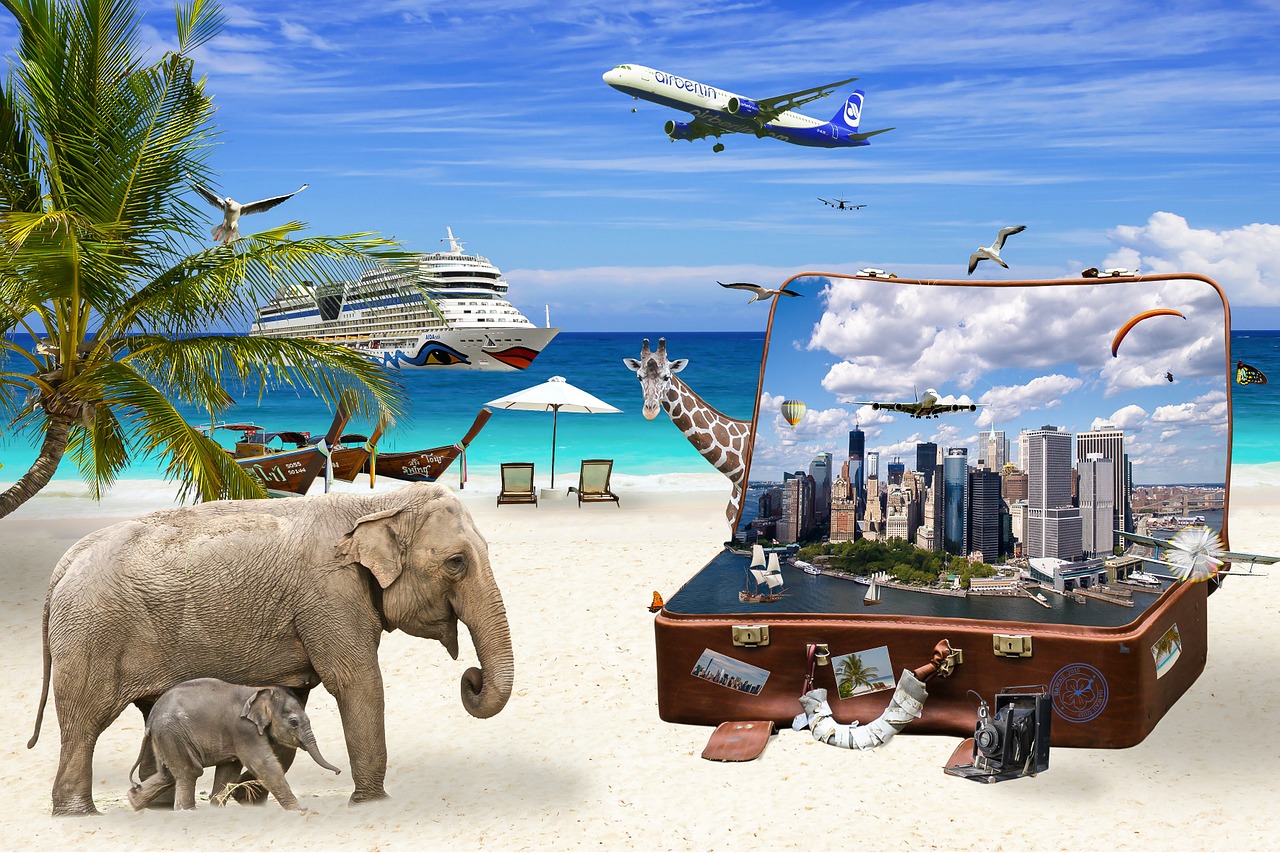