Could there be a more salubrious start to your day than by taking a leisurely stroll along Russell’s Pohutukawa-fringed waterfront, with tui in exuberant song, as the sun pops its head out of the Pacific? This soul-stirring village was just one of a multitude highlights on my winter-defying escape to the wondrous Bay of Islands. I was visiting Russell as part of Fullers GreatSights Cliffs & Caves Cruise, which weaves together a highlights reel of the bay beauties, culminating in a layover in Russell, before returning to Paihia at your leisure on the trusty ferry. 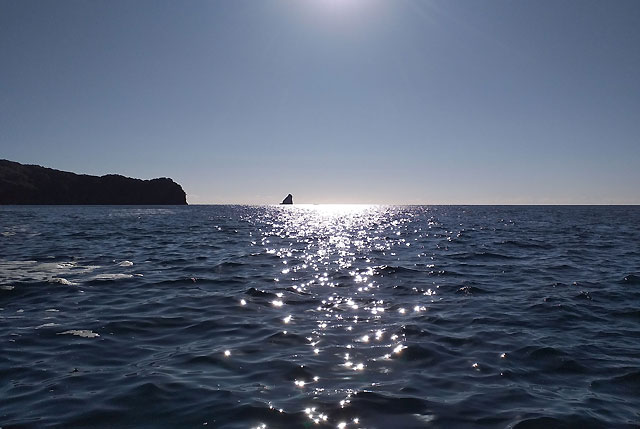 Fullers operate a wealth of excursions, including the iconic all-day cruise, The Cream Trip, which has been plying the waters for over 90 years, ever since Albert Fuller launched the shipping route, dropping off supplies to island residents. Within minutes after departing Paihia on the Cliffs & Cave Cruise, we chanced upon a playful pod of juvenile bottlenose dolphins, turning on a splashy daybreak show, as if right on cue. Our passionate guide, Sinead, remarked how there are over 200 bottlenose dolphins in the bay, there dorsal fins are all unique and the Fullers crew have named most of them. 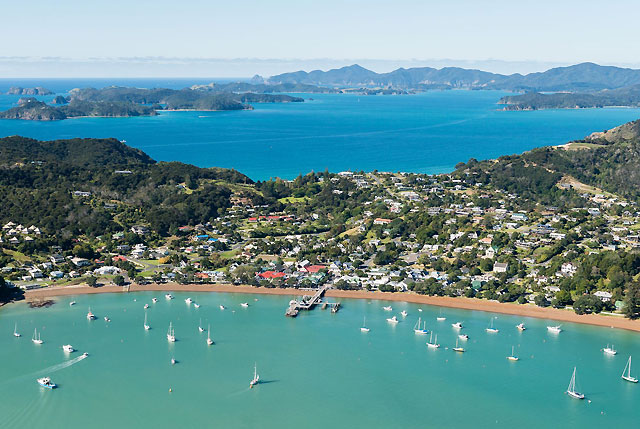 The wealth of marine life is enthralling, with migrating whales, Brydes Whale, Orca and Hammerhead Sharks all frequent cruisers, their fins knifing through the water. Home to a staggering necklace of 144 islands, my fleeting Bay foray only included a handful, alongside sizing up some stupendous natural spectacles. The crystal-clear morning was postcard-worthy, the water glinted like freshly-cut diamonds, with that striking triangular rock, Nine Pin, crowning the horizon. It’s home to the Bay’s colony of Australian Gannets. They’re illustrious dive-bombers, travelling at 100km when they hit the water to scoop out a fish. We rendezvoused with Moturoa Island, now largely a sheep farm, admiring the old WWII gun emplacements guarding against the Japanese. 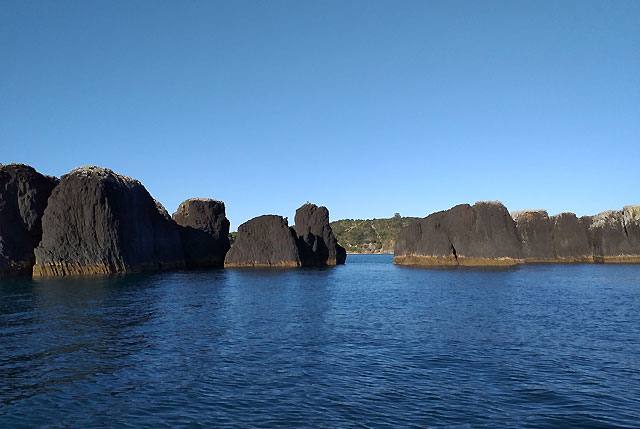 Nearby, Black Rocks. Formed from an ancient volcanic eruption, the lava flow’s whimsical basalt formations are an eye-catching oddity – similar to the Giant’s Causeway in Northern Ireland. It’s a wildly popular diving spot with an abundance of marine life inhabiting the crevices of the layered rock, deep down. In the summer months the rocks cook, heating up to 60C, which savvy birdlife exploit during the nesting season to incubate their eggs. We cruised by Marsden Cross, high above Rangihoua Bay, marking the place where Samuel Marsden held the nation’s first Christian sermon on Christmas Day 1814. Jurassic greywacke rock dominates the bay, a very soft rock where the power of the ocean has created a honeycomb of sea caves. An intimate encounter one of these caves entailed poking our nose into the evocatively-named Taniwha’s Den. 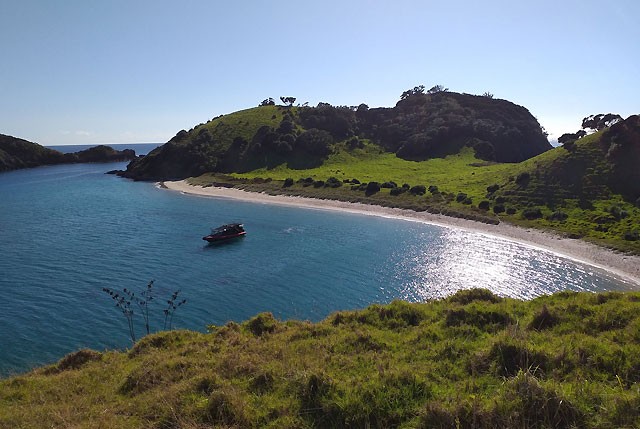 More akin to feeling trapped inside a washing machine on spin cycle, the thunderous rumbling noise reverberating within the cave was spell-binding. We breezed by Roberton Island, where Captain Cook anchored the Endeavour in 1769, and admired Otehei Bay, once home to the American author Zane Grey who popularised game fishing in the Bay of Islands, nearly a century ago. Dropping anchor at Waewaetorea Island, we walked ashore on Stingray Bay, a crescent-shaped slice of island paradise, blessed with bone-white sands and verdant hillside walking trails. The views are achingly gorgeous. Before disembarking at Russell, some fellow cruisers were dropped off at the big boy of the Bay, Urupukapka Island, for a two hour trek. www.dolphincruises.co.nz 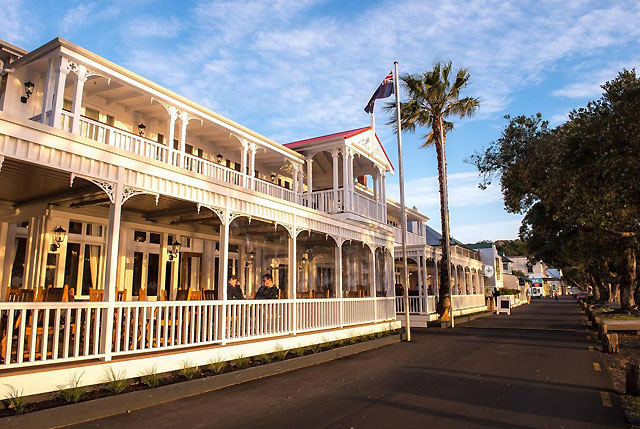 On a sun-splashed morning, the hospitality jewel of Russell, the Duke of Marlborough Hotel, looked positively radiant. Beginning life in 1827 as Johnny Johnston’s Grog Shop, the ex-convict quickly changed the name to the Duke of Marlborough and he gained the first liquor licence in New Zealand. Here’s a fun fact for you – in the height of summer, the Duke serves over one thousand meals a day. If you fancy a casual daytime bite, you can’t beat the Duke platter, a divine a selection of Te ika mata, cured meats, calamari, pickles and cheese. When in Russell, Pompallier House is a must do. You might expect a history of tanning and printing to be rather tedious, but given the rich historical context, the incisive, hands-on demonstrations and the spectacular setting, it’s engrossing. 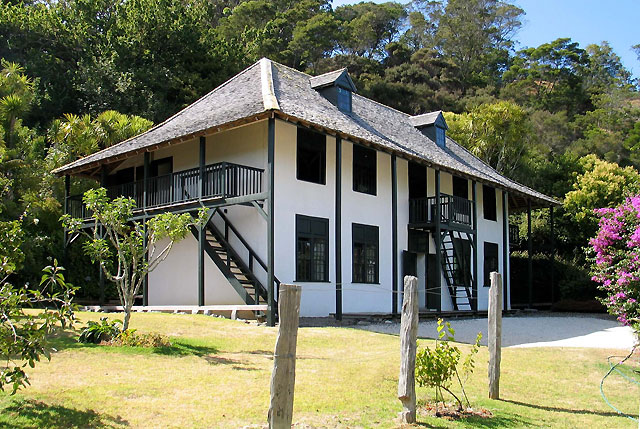 Named after the first Catholic bishop, who arrived in New Zealand in 1838, the French mission worked with Maori leaders putting their oral language into writing, and printing books in te reo. By 1845, 45,000 Maori has been converted to Catholicism. Established in 1842, Pompellier House is now restored to its original French Lyonnaise style, the only one of its type in the country. Pop into the Russell Museum, built in 1836, to see a 1/5 scale of the replica of the Endeavour. For some intrepid leg-stretching, I hauled myself up Flagstaff Hill, where seraphic 360 degree views await, alongside the storied history of Hone Heke cutting down the Union Jack’s flagpole. 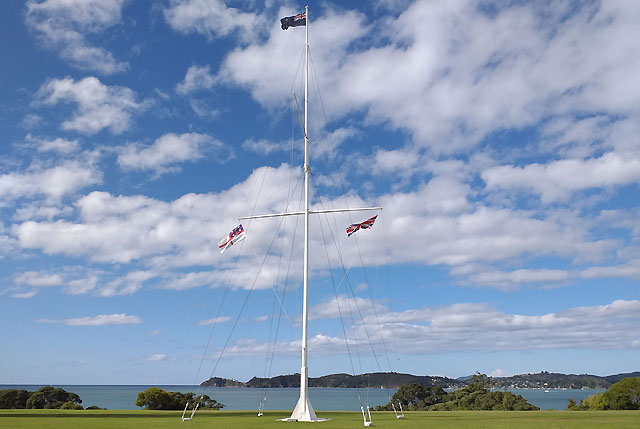 After returning to Paihia on the quick-hop ferry, I had a date with the nation’s birthplace. Blessed with a buckletload of sunshine at Waitangi, you’d be hard pressed to find a more photogenic coastal perch, than standing on that rolling velvety lawn of the Treaty Grounds. A sure-fire way to accentuate the experience is to take a private tour. My guide was Mukai Harua, a mountain of a man, who enriched my visit with a slew of authentic and personal insights. 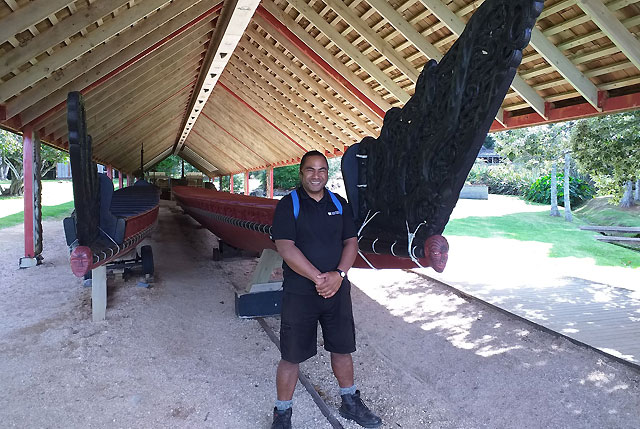 As a 9yr old, he helped paddle the mighty waka, Ngatokimatawhaorua, with Charles & Diana onboard. The world’s largest war canoe needs a minimum of 76 paddlers to handle it safely on the water, delivering a majestic spectacle when it’s launched every Waitangi Day. The immaculately maintained Treaty House contains a small museum with enriching exhibits fleshing out the build-up to the Treaty signing and the awe-inspiring role played by James Busby in bringing the two cultures together. 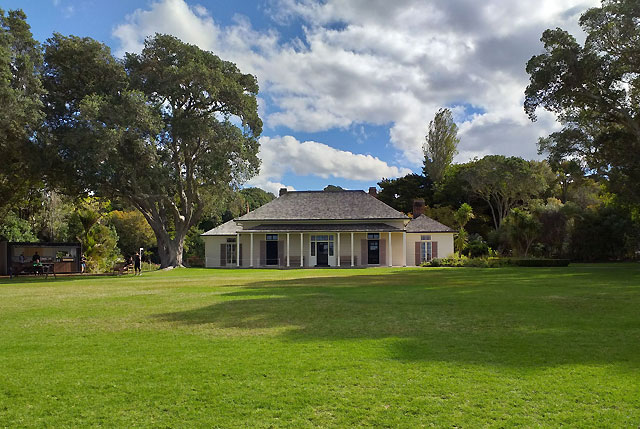 I enjoyed a stirring cultural performance inside the carved Meeting House, blending waiata, poi stick games, Maori weaponry display and a bone-rattling haka. It was my first time back here since the new Waitangi Museum had opened, a thoughtfully presented storehouse of history that walks through the seminal moments in the shaping of a nation, with multi-media flourishes and immersive touch-screen technology. 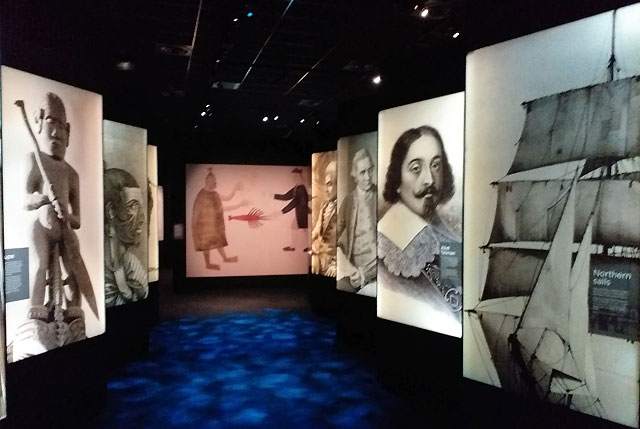 From the Treaty Grounds, a soul-rinsing hike leads you along the bush-clad banks of the Waitangi River all the way to the horseshoe-shaped cascade of the Haruru Falls. More than 100 villages lined the riverbanks in the 1800s. Highlights of the two hour walk include the boardwalk section which passes through the interior of a mature mangrove forest. At low tide, you’ll see crabs scuttling from their holes in the mud to feed. 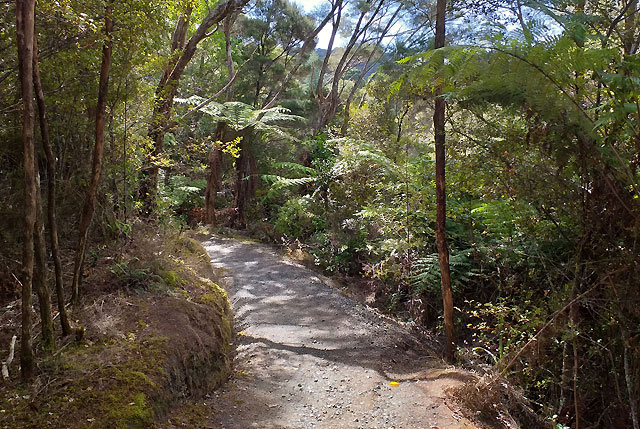 As the river widens, keep an eye out for shags nesting in the pohutukawa trees. You’ll hear the thundering roar of the falls before you see them. They cascade into a wide basin which was New Zealand’s first river port, an important transport junction in the early settler period. 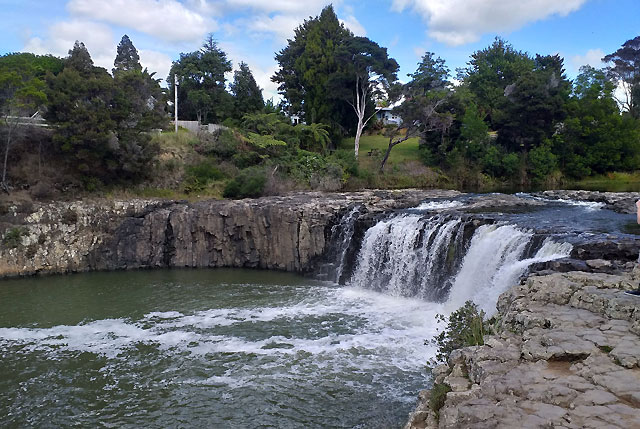 After a power-packed day of history, nature and scenery I took my seat at Charlotte’s Kitchen on Paihia Wharf, for a decadent dinner. Situated right at the end of the wharf, the dress-circle view on the Bay at twilight is nearly as delicious as the cuisine. Four years old and a runaway crowd-favourite, I plumped for one of Charlotte’s Pizzas, the Carne, which brims with a tomato base, ground salami, pork and fennel sausage, buffalo mozzarella and parma ham. Sinfully good! www.charlotteskitchen.co.nz 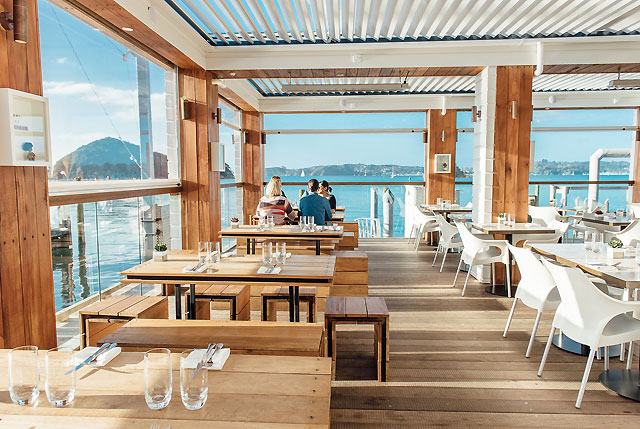 Where to stay? Just 5 minutes drive from the town centre, Paihia Top 10 Holiday park is truly a hidden gem. It’s knock-out waterfront location is tranquil and secluded. Roll out of bed for a morning dip or kayak! Offering free WiFi and private bay access, the holiday park features a fantastic children’s playground in a park-like setting on the water’s edge. 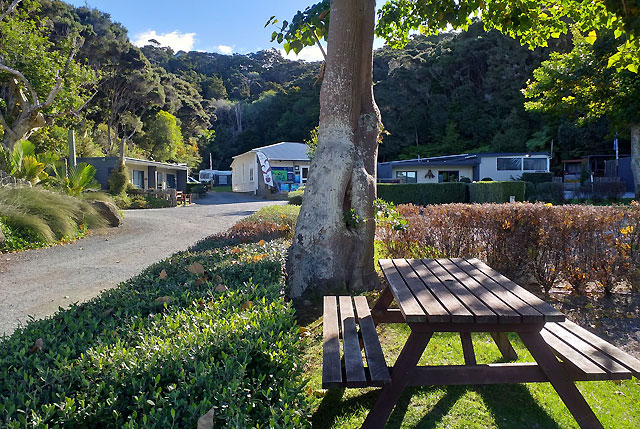 I stayed in a self-contained superior cabin which was equipped with all the creature comforts you’d expect from a top end motel, at bargain rates. Breakfast is available on-site. This holiday park is out of the box. https://www.paihiatop10.co.nz/ 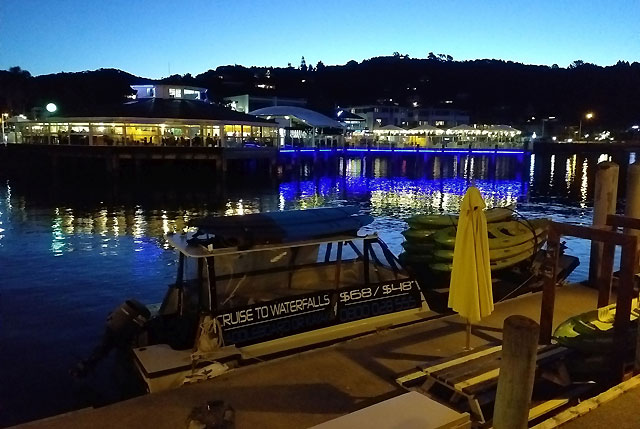 I tripped my way north with Jetstar to Auckland, for the short drive up to the magical Bay of Islands. Score even sweeter deals with a Club Jetstar membership. The programme offers travellers access to special ‘member only’ fares, 20% discount on baggage and seat selection products, and early access to the biggest sales. Bag a bargain fare deal and seat to suit at www.jetstar.com 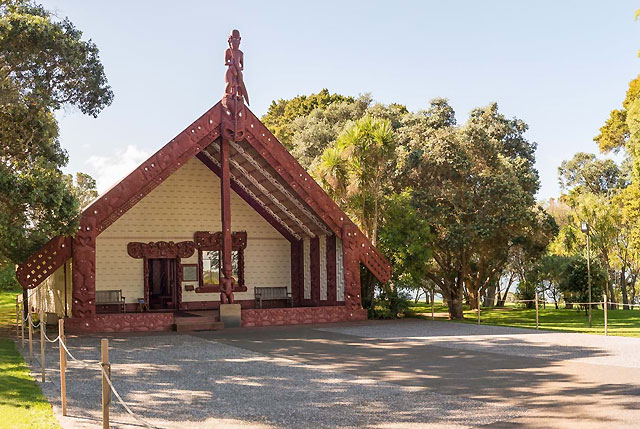 For more touring tips and insights, check out the Bay of Islands travel website. https://www.visitboi.co.nz/ 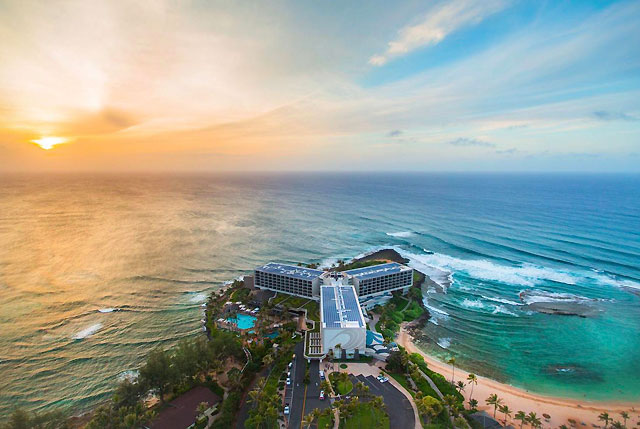