I’ll never forget the sight of my first iceberg. After two days of leaving Ushuaia in South America, and rocking and rolling on the notorious Drake Passage, it means our ship has finally arrived in Antarctica. The titanic piece of ice wallows slowly in the swell, a part of the southern landscape broken off, drifting north to reveal the first glimpse of the frozen continent to arriving strangers. 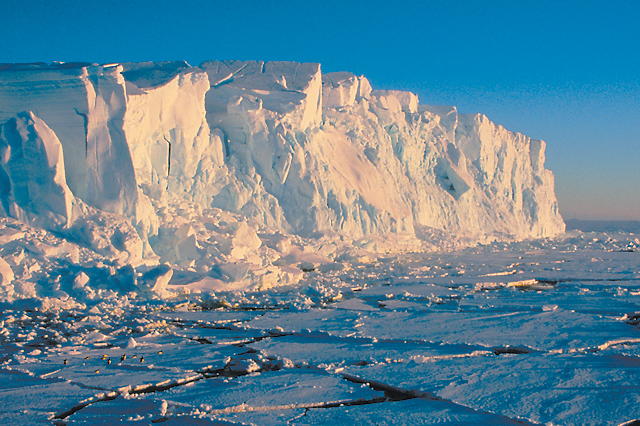 Wide-eyed and giddy with excitement, it’s not long before the rubber Zodiacs are lowered into the water and we prepare for our first landing at Paradise Bay, appropriately named because the surrounding mountains seem to rise straight to heaven. Arriving ashore, a waddle of Chinstrap penguins greets us, and I can’t help but think that they look like a bunch of tipsy butlers in tuxedos ready to serve us drinks. No one is allowed closer than five metres to any animal in Antarctica; however, the penguins don’t seem to have read the rulebook, and sitting by the shoreline, an inquisitive little critter starts nibbling gently at my gumboot. He’s so adorable, that for a moment, I contemplate stuffing him into my backpack; and from the enchanted looks on the faces of the other passengers, I don’t think I’m the only one. 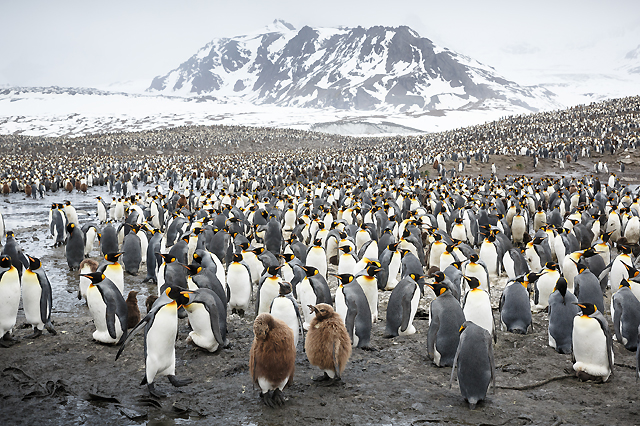 Visiting Deception Island, the caldera of a still active volcano, tests the limits of what I thought humanly possible. Antarctica is not exactly a place known for swimming, but along with a group of other intrepid passengers, I’m stripping off my clothes and preparing to dive into the icy waters. The “polar plunge” as it’s called is somewhat of a rite of passage in Antarctica, but the chilly dip lasts less than a minute before I’m running back to the comfort of my woolly socks and down jacket.I find it’s difficult to sleep in Antarctica. This has little to do with the round-the-clock daylight, but everything to do with the overpowering feeling of FOMO (fear of missing out) that almost everyone experiences. Don’t expect to be sitting around on deck sipping cocktails on an Antarctic voyage, this is immersive travel in every sense of the word. 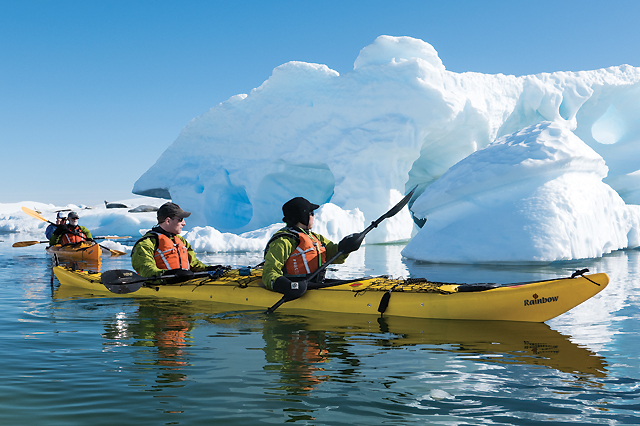 On a midnight Zodiac cruise, which seems like the middle of the day, three humpback whales surface right beside our craft, so close we can smell the krill-breath puffing from their blowholes. I never thought I would come eyeball-to-eyeball with such a giant creature, but they swim around our inflatable, spy-hopping and diving underneath in a kind of whale version of hide and seek, then retreating with a majestic flick of their tails. The wildlife encounters keep on coming. Colonies of Adélie, Gentoo and Chinstrap penguins provide hours of endless entertainment; while velvety crabeater seals snooze together on ice floes – their pale bellies soaking up the sun. Fur seal pups greet our Zodiacs on shore like a pack of unruly puppies, barking and snapping before being shooed away; while fat elephant seals lollygag on the beach in a soup of seaweed, snorting and belching at each other like old men. 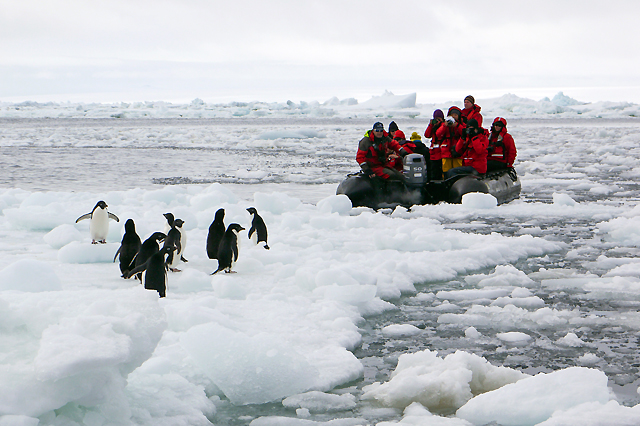 When we’re not totally absorbed by the seemingly limitless wildlife, we’re captivated by the supernatural force of the ice around us. On our voyage there is the option to kayak, so we spend some time following our guide around the colossal cliffs of white that rise vertically from the salty seas. Whipped by wind and water into fantastical shapes they stir the imagination: crystal fairy-tale palaces, multi-tiered wedding cakes, and a crazy array of giant animals. Some are so blue they seem as if they are lined with precious turquoise and sapphires, their reflections mirrored in the gin-clear waters. 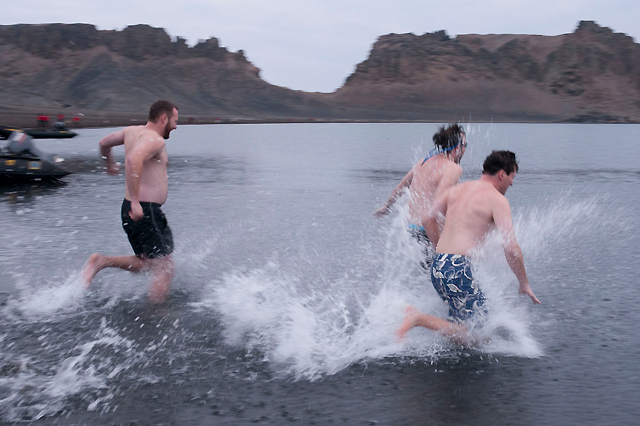 Crunching through ‘bergy bits’ we take a few moments to listen to the most silent of silences, punctuated by thunderous blasts of a nearby ice sheet calving and plummeting into the water below, bringing a new iceberg miraculously to life. Like a shape-shifting chameleon, I realise that the Antarctic landscape is ever-changing and short-lived, and no two journeys are ever alike.But the ultimate Antarctica experience was still ahead of us – the once-in-a-lifetime opportunity to spend the night on the ice. Huddled down with just my thermal sleeping mat and bivvy sleeping bag, I felt I had experienced first-hand what those early Antarctic explorers felt in their conquest of the great southern land. Those of us brave enough to weather the elements (although it really isn’t that cold), are treated to a brief sunset and sunrise which fills the sky with an endless palette of golds, pinks, purples and oranges. 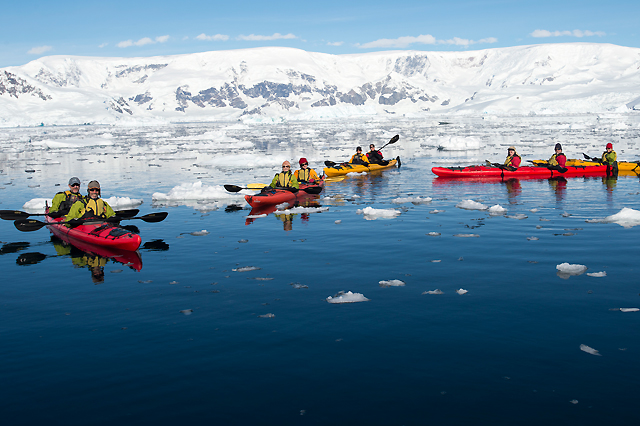 I discover there is more to an Antarctic expedition than just being immersed in the overwhelming performance of Mother Nature, and visiting research stations and bases dotted along the Antarctic Peninsula provides another glimpse at life on the ice. The Ukrainian staff at Vernadsky Station offer a warm greeting and an introduction to their study into global warming. Although I think I remember the visit more for the scientists’ homemade vodka than the research. At the oh-so British station at Port Lockroy, it’s impossible to resist sending a postcard back home from the world’s most southerly post office.In between cruising about in Zodiacs, watching the acrobatics of albatrosses soaring off the bow, or sitting amongst a penguin rookery, there are a team of experts on board that take us even deeper into the richness and wonder of Antarctica. They enlighten us with lectures to help us understand the behaviours of the wildlife we are seeing; the secrets of the planet’s past held in its geography; and the fascinating stories of explorers pushed to their greatest extremes. 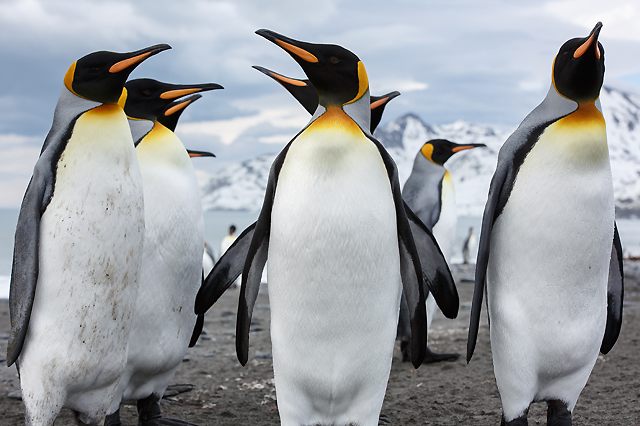 We get to experience a little of what these early pioneers encountered as we cruise towards South Georgia and anchor at Fortuna Bay, where we follow in the footsteps of Sir Ernest Shackleton, as this is where he made his famous journey to save the crew of the icebound Endeavour. We walk the last leg of his epic tale of survival to the abandoned whaling station at Stromness; and later, at Grytviken, visit his grave and salute him with an Irish whisky.

With its overwhelming wildlife, South Georgia certainly deserves its nickname ‘The Serengeti of the Southern Ocean’, the northern tip of South Georgia is said to have more wildlife per square foot than any place else on Earth. At Salisbury Plain, the sight of a carpet of more than 250,000 pairs of King Penguins, the second-largest penguin in the world after the Emperor Penguin, is almost beyond belief. After lunch we sail over to Prion Island, looking for wandering albatrosses on their nests, one of the only places in the world where you can see them on land. We also add Macaroni and Rockhopper penguins to our growing wildlife checklist. 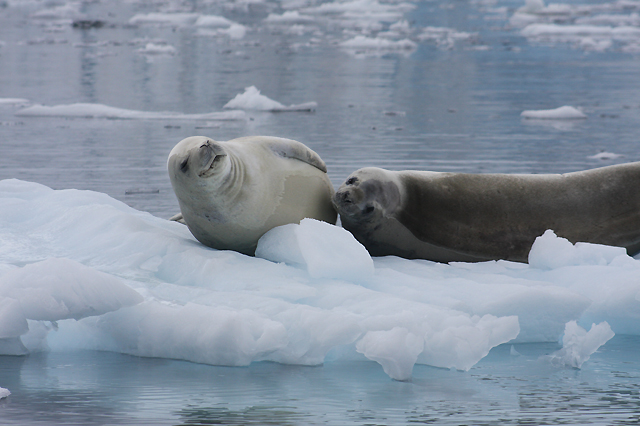 It’s hard not to use superlatives when talking about Antarctica. It bombards you with sensory overload at every turn. If you’ve ever seen documentaries such as March of the Penguins or Frozen Planet, you might think you have a pretty good idea of what being in Antarctica is like. But honestly, there’s no movie you can watch, book you can read, or photos you can see that adequately conveys the overwhelming, otherworldly experience of actually being there. 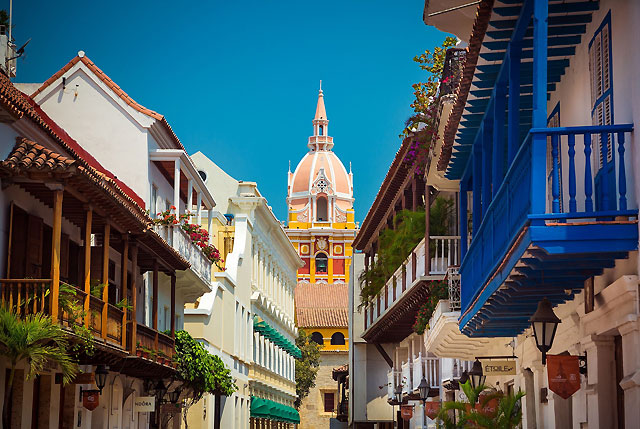